The return of the larkspur 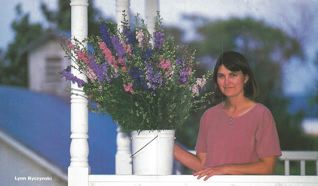 Larkspur was once in my top 10 crops — a reliable producer that was extremely easy to grow, carefree, and profitable. For many years we direct seeded it in September and harvested it the following May. Nothing was easier or more beautiful. The photo at right was taken in 1998, shortly after we moved to this farm, and the beginning of a good five-year run for larkspur.
But then something changed that made larkspur fail year after year. Maybe it was warmer winters, or lack of moisture, or earlier springs — or maybe some combination of those and other factors. Other growers nearby and across the Midwest also complained that they couldn't grow larkspur anymore.
I kept trying, for several years continuing to direct seed a few beds in fall, with no luck. The last time I planted larkspur was in the fall of 2009, and that was really with no expectation of getting a good crop. The following spring, there was nothing. Some of the seeds germinated, but never produced the 4-foot stems we used to get. So I accepted defeat and stopped buying larkspur seed.
Here it is, the spring of 2012. A bed that was left untended over the winter — filled with last summer's annuals and this spring's weeds — has produced larkspur. It's not an abundant crop but the stems are tall and strong. It's reappearance suggests my previous theories were off the mark; winter was warm and spring was earlier than ever.
I don't know why larkspur has returned. I'm just happy to see it and encouraged enough to plant again this fall.