An inexpensive substitute for a refrigerated truck 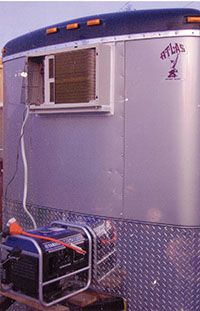 Since the CoolBot was introduced in 2007, thousands of produce farmers have created inexpensive walk-in coolers with the device, which enables a window air conditioner to cool down to 35°F without freezing up. Although most applications are for stationary walk-in coolers on the farm, an increasing number of people are using the CoolBot to make refrigerated trucks and trailers that can go to market. An additional advantage for farmers in some places is that a refrigerated truck or trailer is not considered a permanent, taxable structure, whereas a walk-in cooler might be taxable.

A cargo trailer or box truck can be insulated to the same specifications as a walk-in cooler, with a hole cut in it for mounting a window air conditioner. The CoolBot is then installed on the wall inside the trailer and attached to the front of the air conditioner. The unit can be plugged into an outlet while parked at the farm, or into a gasoline generator for cooling when away from the farm.

“I really like this system of having everything ready to go to market in a cold truck versus having to load trucks from a walk-in cooler to a non-refrigerated truck,” said Ewell Culbertson of Pachamama Farm in Longmont, Colorado. He bought a CoolBot and air conditioner to replace the Thermoking refrigeration unit on a refrigerated truck. “We want to use it as a ‘walk-in cooler’ where we will load everything that’s going to the Boulder Market into it on the farm. It will be plugged into a 220 outlet. Then on market day we’ll disconnect the power and drive it to market where we hope the box will stay reasonably cool all day as we sell cool produce in the hot summer months.”

Ron Khosla, the New York market farmer who invented and sells the CoolBot, says that many customers are using the system in trucks and trailers because traditional refrigerated trucking is “crazy expensive.” A quick survey of automotive websites verifies that it’s beyond the reach of most small farmers; for example, a typical low-end listing is for an 8-year-old 16’ refrigerated truck with 217,000 miles for $16,000. Besides the purchase cost, there’s maintenance for both the truck and the cooling system.

The CoolBot is a cheaper alternative: $350 for a new window air conditioner and $300 for the CoolBot to modify the air conditioner so that it will go below its preprogrammed minimum temperature of 60°F.  In addition, there is the cost of the cargo trailer, shipping container, or truck box — which often can be found used for a low price — and the cost to insulate it if necessary.

Khosla recommends using 3 inches of Polyisocyanurate (polyiso) insulation in the walls, floor and ceiling. It’s readily available everywhere in 4x8 sheets, 1.5 inches thick. It’s grey or yellow colored and foil backed; the foil goes to the hot outside. White “EPS” is a bit cheaper, but it requires 5 inches of insulation. Blue or pink polyurethane is also a bit cheaper but it loses 30% of it’s insulating value over the first few years, so you would have to use 4 inches of that. When affixing the insulation, overlap the seams and make sure not to leave even the smallest hole.
“Lots of insulation and one tiny hole is just the same as less insulation and no hole,” Ron said.Here are his other comments about mobile installations:

“People repeatedly forget to insulate the floor of the truck or trailer. I got another call like this just yesterday. Cold sinks. They are just thinking of the sun beating down on the box, but all the cold is spilling out the bottom. (The sun is bad, too - you have to do both.)

“Window air conditioners are cheapest and that’s what ALL our truck people have used so far. You have to do extra strong mounting brackets to mount the a/c unit up there. They are heavy and have to withstand the bounce of the vehicle. It’s not rocket-science by any stretch, they aren’t THAT heavy, but people need to think about it and not just scab it onto the wall of the vehicle. A better choice could be an RV air conditioner, which has a streamlined shape and mounts on top of the trailer or truck. The cost of an RV air conditioner is about $600 for a 15,000 BTU unit (vs. $350 for a 15,000 BTU window unit.) So it’s more expensive.

“Also, 15,000 BTU is about the biggest you can buy, which only cools a well-insulated truck that is 7x10 safely to 38 or below. You could go with a bigger box (or less insulation), but then you will be cooling only into the mid-forties, which isn’t horrible, but you need to keep it in mind — and it’s death for dairy.

“People can go larger if they are using a window unit up to 24,000 BTU but those run on 220-volt, which requires a different type of extension cord and a 220 outlet. Lowe’s sells 220-volt extension cords up to 100 feet long for about $1/foot. Most all the gas generators produce 220 power, so it’s not a huge problem but one MORE thing to think about.
“Most readily available, affordable air conditioners (even RV air conditioners) run off 110 Volts AC - that’s great if you are okay with plugging in, but it’s a pain for people who want to be cooling as they load or while they’re driving or at market. To solve this, people use small gasoline generators that they plug into. That works great. Other people have tried inverters, which plug into your vehicle’s alternator and convert 12 volts DC to 110 Volts AC. That works, too, but you need to drastically upsize the inverter. On the box, the A/C will say it uses 1350 watts when running, but what they don’t tell you is that when it starts up, it will pull something like 4000+ Watts (up to three times operating watts for a split second.)

“I’ve had people buy 2000 watt inverters thinking they were oversizing things and then the overload protection kicks and turns off the inverter and the a/c unit will never start.  (this is relevant whether or not they buy a CoolBot). So people need to be warned about that. There also aren’t affordable 220 inverters on the market, so once again you are stuck with air conditioners that are 15,000 BTU’s or smaller (the size that comes in the 110 Volt A/C flavor). I am working on this problem... I just bought a “soft start capacitor” from grainger.com that should make it so you can use a smaller inverter (closer to the run-wattage rather than three times the size).

“People with bigger box trucks (even the 20 footers) can cool to temperature but only with two air conditioners and two CoolBots. One 24,500 BTU Air conditioner will cool a 20+ foot box truck only into the low-forties, NOT into the thirties. This is very relevant for the dairy people... not so relevant for the veggie and flower people.”

For more information on the CoolBot, visit Khosla’s website, www.storeitcold.com.