Home Archive It's easy to fall in love with lilacs

It's easy to fall in love with lilacs

Cold weather held back spring this year and when it finally warmed up, many plants that usually flower over the course of a month all burst into bloom simultaneously. We had forsythia, apples, peaches, viburnums, flowering almond, daffodils, tulips, spirea, crabapples, and lilacs making a riot of color on our farm. The air was sweet with a heady mix of fragrances.

White lilacs like the one above are always useful for wedding  work. This is a hyacinthiflora 'Mt.
Baker' and is an excellent early, pure white single.

One of the most delightful sights amidst this floral extravaganza was a row of young lilac bushes I planted beside the pond in fall 2007. They were all in bloom at the same time, whereas last year they were separated by as much as nine days. Seeing the blossoms side by side emphasized the color differences in the vast genus Syringa. My small collection of about 25 bushes ranges from pure white to deep purple with several shades of lavender and pink in between. Combining one branch of each color, and accenting them with the bright green globes of snowball viburnum, resulted in a knockout bouquet. I was so taken with these flowers, I was ready to double or triple my planting.
But first I called my lilac mentor, Brian Morley, who provided advice when I put in my first bushes. Brian is a lifelong fan of lilacs and extremely knowledgeable about all aspects of their taxonomy and production. He has about 60 bushes on his farm, and several hundred seedlings that have resulted from his hybridizing experiments. He’s also the owner of Bergamot and Ivy, a high-end florist in Kansas City. So he knows both sides of the marketing equation, and was able to tell me some of the trade secrets of growing and selling lilacs.

First, Brian said, market demand and prices are very good. Most of the supply comes from Holland, where growers have been perfecting the art of forcing lilacs out of season for 150 years. The labor-intensive forcing system and the cost of shipping the heavy woody stems makes Dutch lilacs pricey. This year, Brian said, they are $18-22 for a 10-stem bunch. Domestic lilacs, known in the trade as bush lilacs, cost $12-15 for a bunch of about five stems with 10 flower clusters.
“Our wholesaler never throws them out; they go very fast!” Brian said. “In our region, people like white, blush (‘Krasavitsa Moscovy’) and the dark purples. Head size counts towards value and price,  and more ordinary old fashioned purple/lavender would be a bit less desirable. I think doubles last better, and shatter less, and are perceived as higher grade flowers.” 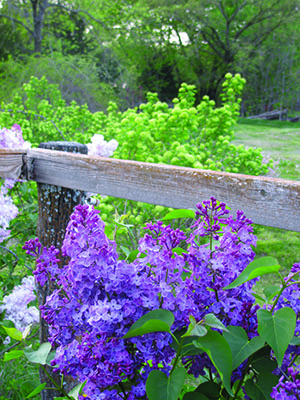 'Pocahontas' is a dark purple hyacintha hybrid. (Monitors show colors differently; this is not as blue as it appears online.) It is one of the earliest bloomers, and a natural match with the bright green balls of Viburnum opulus Roseum, the snowball bush in the background.
It all sounds pretty good so far. I’m ready to order plants, until I start looking at the list of lilac varieties and discover that there are at least 1,500 named cultivars and hybrids. The most authoritative source of information about lilac varieties is the 1988 book Lilacs: The Genus Syringa by Father John L. Fiala. The author, whose passion for lilacs and lilac breeders brightens every page, recommends his favorite varieties in each color class. His infatuation with lilacs is so great, however, that his list of white cultivars numbers 90. So back I go to Brian for variety suggestions.

Selecting varieties
He advises choosing varieties with a goal of having a wide selection of colors and the longest possible bloom time.

Seven color classes of lilacs are recognized: white, lavender, blue, violet, pink, magenta, and purple. In their book Woody Cut Stems for Growers and Florists, Lane Greer and John Dole report that color preferences vary regionally and even within cities, based on the clientele a grower develops. For example, one Washington, D.C., grower is quoted as saying he sells whites best; another grower in the area says anything but white sells best for him. Brian says to grow white, for sure, because it’s so popular for weddings. But also grow pink, lavender, and dark purple to accommodate the broadest possible market.

Doubles are perceived as being higher value, plus they ship better and shatter less. This one is the S. vulgaris cultivar 'Nadezha'.
Next, choose varieties carefully based on bloom time so you can have the longest possible harvest season. A single plant may be in bloom, from colored bud to petal fall, for 16-20 days. That makes lilacs one of the longest-blooming shrubs. However, when you are growing them for cutting, your harvesting window is very short, and lilacs do not store well. So it makes sense to choose varieties that naturally bloom at different times.

The earliest lilacs to bloom are the hyacinthaflora hybrids, Syringa x hyacinthiflora. Next, a week to 10 days later, are cultivars of the common lilac, S. vulgaris. Then come the Preston hybrids, 10 days to two weeks after the common lilac. 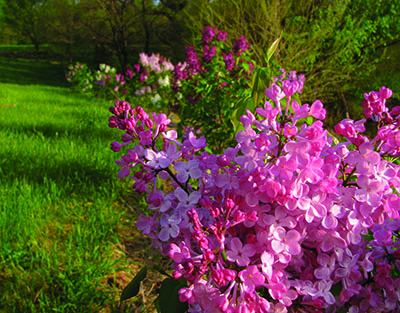 Syringa vulgaris 'Maiden's Blush' glows in the early morning light of a spring day. Plants of three other cultivars are in the background, giving some indication of the color variations available in lilacs that bloom at the same time.
Requirements
Most lilacs require a chilling period to bloom well, so are grown primarily from Zone 7 north. They are very hardy, withstanding temperatures as cold as 40 below zero, so can be grown in Zone 2. They are best in Zones 3, 4, and 5, and are actually grown in almost every state, even California. In the South, two species may be grown (S. meyeri and S. microphylla) because they have lower chilling requirements. Their colors and fragrance are not as spectacular as the varieties available to northern growers, but any lilac is better than no lilac at all.
Lilacs require well-drained soil and do not tolerate heavy clay soils. They prefer a pH of 6 - 7. They should be grown in full sun. Some varieties can grow to 30 feet tall and 10 feet wide, but that’s not going to be the case with a successful cut-lilac grower who harvests much of the plant each year. For cut-flower production, lilacs should be spaced about 5 feet apart. Landscape fabric can be used during the establishment phase, but the plants will outgrow their holes in a few years.
Lilacs are troubled primarily by three problems: deer, borers, and bacterial blight. Brian has had good results using Irish Spring soap to deter deer from his plants. Borers are common in the Midwest and can be identified by branches that suddenly wilt. They must be cut off immediately and disposed of to prevent the borers from spreading. Bacterial, or Pseudomonas blight is the most severe and widespread problem of lilacs. Choose resistant cultivars, and prune out any infected branches.

Harvest and post-harvest
The beauty of lilacs is, sadly, fleeting. Most growers report only five days of vase life. That may be extended a few days by cutting in the evening and using a hydrator and floral preservative. Stems should be cut on a sharp angle and should not be pounded, as is so often suggested for woody stems. (It’s never a good idea to pound woody stems because the small fibers created will decompose and plug up the plant’s stem.) Foliage should be removed from the stem. Lilacs hydrate better when placed in a bucket of deep water, rather than just a few inches of water. They can be held in the cooler at 39-41°F for three to four days before use. For arrangements, recutting stems and changing the water daily will help extend the flowers’ life. Although the Dutch lilacs are shipped dry and in tight bud, local lilacs can be cut when one-third or more of the panicle is open.

Financial prospects
After researching lilacs, I’ve got to conclude that they are not a get-rich-quick scheme. At least four years will elapse between planting and the first harvest. The plants require annual pruning, weeding and fertilization, plus monitoring for disease and borers. Their bloom time is not reliable, as I witnessed this spring, and precedes most other flowers, even those in the hoophouse. They need to be harvested within a very specific time frame, they don’t store well, and they won’t last long in the vase. With all that, lilacs have beauty and fragrance enough to outweigh their shortcomings.

Lynn Byczynski is the editor and publisher of Growing for Market and the author of The Flower Farmer: An Organic Grower’s Guide to Raising and Selling Cut Flowers ($35 retail, $28 to GFM subscribers).

Woody Cut Stems for Growers and Florists by Lane Greer and John Dole is  available for $40 ($32 for GFM subscribers) plus $4 shipping. See page 2 for ordering information.