Home Archive Can you make money on Tulips?

Can you make money on Tulips?

This article originally appeared in the August 2002 issue of Growing For Market magazine.

As I write this, it’s mid-July, and we’ve been suffering through a week of 95-degree-plus temperatures with the kind of humidity that makes me feel very slow and tired. The only thing making me happy right now is that it’s time to place my tulip order.

Tulips! What a stunning flower! I love the diversity of them - the tall, slim and elegant French tulips, the brilliant color-splashed parrots, the romantic peony-flowered varieties. I love the colors, everything from pure white Maureen to shimmering purple Negrita, from blushing pink Angelique to tomato-red Appledorn. I especially love having them in the house. Cut tulips continue to grow in the vase, bending gracefully and opening fully by day, straightening and closing up tight at night. Only one other flower gives me such a sense of being in the presence of a living thing (It’s the poppy, but that’s another column.)

Yes, I love tulips. But I had never grown them commercially until last year. Previously, I had sold only to florists, and florists can buy tulips for less than 50 cents a stem in spring from Holland. I couldn’t see much sense in buying a 25 cent bulb that would produce only one 50 cent flower.

But then three things changed that got me interested in tulips. Most importantly, I got a retail market where I could sell tulips. Customers don’t know what flowers cost from wholesalers. All they know is that their world has been gray for a long time, and tulips are a flash of color that lifts moods and brings optimism. My customers were thrilled to pay $1 a stem and I sold virtually every stem I picked.

The second thing that made me decide to grow tulips was the fact that I now have unheated hoophouses where spring comes about two weeks earlier than in the field. By growing several kinds of tulips and planting some in the hoophouses and some outside, I was able to have a 4-week tulip season, the entire month of April. (Here in Kansas, we usually get an early hot spell that brings all the bulbs into bloom simultaneously.)

And the fact that I could stagger my harvest over a month allowed me to buy a lot more tulips than I would have ever considered before, which cut the price per bulb in half. I also connected with a Dutch flower company called Moolenaar that has prices lower than most other wholesale bulb companies. Prices for common (but still gorgeous) varieties like Appledorn and Menton are under 10 cents a bulb. The most expensive bulbs I bought, Flaming Parrot, were 17.7 cents each. Shipping adds about 1.5 cents per bulb. Moolenaar sells only by the crate (400-500 of each variety) and you have to buy 10 crates. By pooling with friends who are cut flower growers or landscapers, I’ve been able to order 18 varieties for next year, and I’ll plant 5,000 bulbs - about double what I grew this year. Contact information for Moolenaar is at the end of the article.

Variety selection
With so many thousands of varieties, how do you choose? A lot depends on your market and on what kinds of tulips have done well for you in the past. In cool spring climates, tulips really do bloom in sequence according to the descriptions in catalogs - the early varieties, followed by Triumph and Giant Darwin Hybrids, followed by the single late varieties. August de Hertogh, whose book Holland Bulb Forcers’ Guide is the essential manual for greenhouse production of tulips, found that areas with the least temperature fluctuations had the longest harvest season. In Corvallis, Oregon, and Pomona, California, tulips bloomed for more than two months. In most parts of the country most years, harvest can be expected for 30 to 40 days. Cold winters also are essential for producing long stems, so if you are prone to mild winters, you should choose the tallest varieties. Last year, for example, the weather was so mild that the soil in the hoophouses never froze. The early varieties, which are supposed to be 12 to 18 inches bloomed at half that height. Six to nine inches isn’t tall enough to sell, so I won’t run the risk of a mild winter again. Instead, I’ll focus on the Giant Darwin Hybrids and single late varieties, which are so tall they’ll have adequate stem length even if they don’t get enough chilling to achieve their potential. 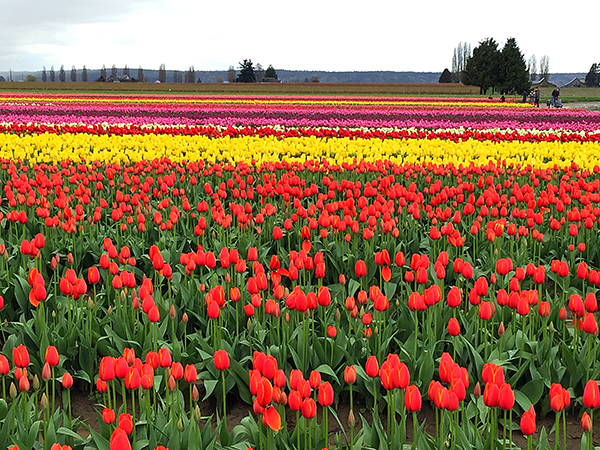 Another factor I consider in choosing varieties is the color preferences of my market. I sell at a natural food grocery store, and bright colors work best. As pretty as the pink peony-flowered Angelique is, only a small number of customers chose those over the brighter colors. I had great success with a mix of red, yellow and red-flamed yellow. People also liked pinks and yellow together. The dark purple of Negrita was greeted with enthusiasm at first because it was the first to bloom, but was soon surpassed in popularity by the bright colors. I also liked having the very late Mrs. J.T. Scheepers because it was still blooming outside when I had other flowers coming on and it’s a great yellow that lights up a bouquet.

I should also say that spring starts in most of the United States a month earlier than the catalog writers expect. Flowers that were described as May flowering bloom in mid-April for me. So that’s another factor to consider in growing tulips: Will you have a market? Most farmers’ markets don’t start till May, and if that’s your only outlet for flowers, you should be sure to find out whether tulips will still be blooming then on your farm. If you haven’t grown them at all before, you can probably ask at garden centers or call the city landscaping department to get bloom dates for the different kinds of tulips. Of course, every spring is different. 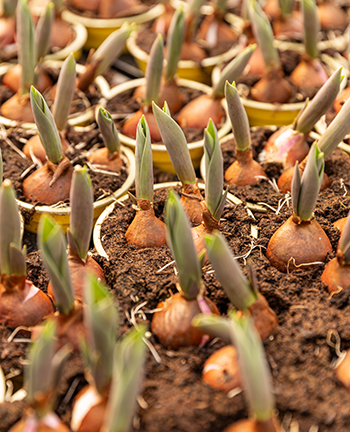 Planting
Tulips can be planted close if you don’t intend for them to perennialize. Another grower described it to me as planting them “like eggs in a carton” - close, but not touching. We were adding soil to one of the hoophouses anyway, so we basically laid the bulbs out on the bed, fertilized with a mixture of soy meal and bone meal, then covered the bulbs with the new topsoil. In established beds, we dug out half the bed into a cart, laid out the tulips then shoveled the soil from the second half of the bed on top of them. Then we poured the soil from the cart onto the second section of bulbs.
We watered them in, and occasionally watered the ones in the hoophouse during the winter, but otherwise were done with them until they bloomed. Some growers do have problems with calcium deficiencies in their soil, which can lead to a condition known as stem topple in which the tulips just topple over. Calcium nitrate soluble fertilizer is commonly used to fertilize tulips; organic growers can’t use it but can incorporate bone meal or soft rock phosphate to increase soil calcium. In general, though, if you’ve never had problems growing tulips in your garden, you probably don’t have to worry about calcium deficiency in your field.

Harvest
The week or two before tulips bloom is the most nerve-wracking because a hard freeze can destroy the crop. Tulip buds can stand cold down to 25 or 20 degrees - if colder weather is predicted, you should cover them with a row cover held above the tulips on hoops.

Tulips are ready to be harvested when they are 50% to fully colored. Cut any earlier, they may not open. Most commercial growers pull the tulips, bulb and all, to harvest. Some varieties, particularly the Giant Darwin Hybrids, will perennialize. (Areas with long, cool spring and summers are more conducive to perennializing, because the leaves will stay around longer to photosynthesize and feed the bulb.) I figured that at 10 to 18 cents a bulb, the space was more valuable than the tulip, so I harvested all of mine by pulling them. That also gives an extra four or five inches of stem length. Because I was sleeving mine and selling them in water, I cut off the bulbs and threw them in the compost. (Don’t leave the bulbs in the beds, where they can serve as a site for Botrytis.) A florist told me that he would prefer to buy them with the bulbs left on if the bulbs were clean and white. He likes to use the entire plant in clear glass containers.

Tulips should be wrapped tightly as soon as possible and stored upright in water or horizontally dry to prevent the stems from bending. When harvesting, I lay a stack of opened newspaper on the ground and fold up one corner of the top paper. When I have cut a bunch of 10, I place them with the stems protruding from the folded corner and roll up the tulip bunch like a burrito. Then I immediately place the bunch in a bucket of water.
Tulips grow several inches during the first day or two in water, and they take up a lot of water to do it, so be sure to fill the bucket deep enough. Floral preservative isn’t necessary - tulips in plain water will last a week in the vase. Tulips should never be placed in water with freshly cut daffodils, because daffs exude a sap that is toxic to tulips. After the daffodils have been in water 12 hours, the stems can be rinsed and they can then be used with tulips or other flowers.

Forcing in the greenhouse
Tulips are easy to force if you have a cooler where you can give them the cold treatment they need. The question is whether you can sell them at a price that makes it worth your trouble. Big greenhouse operations flood the market by Easter with potted forced tulips. Last spring a pot of three tulips sold for $3 wholesale. But those tulips are not always the best looking. A friend who worked at a wholesaler last winter said the potted tulips were so bad she was inspired to grow her own this year and direct market them to florists. A florist encouraged me to grow small wooden crates of tulips for him for the same reason. 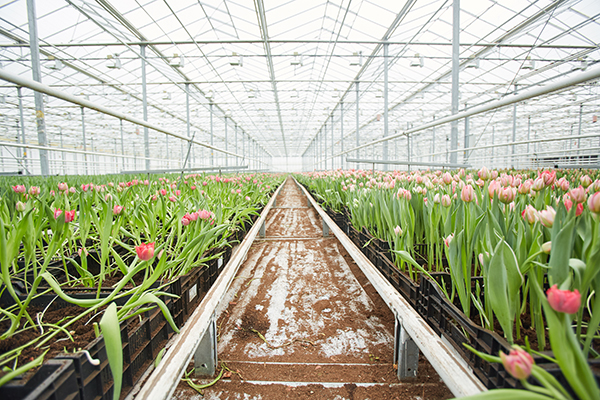 For potted tulips, the bulbs must be planted then stored in the cooler, which takes up a lot of space. Cut tulips, though, are easier: According to de Hertogh, bulbs can be stored in open crates in the cooler, then planted in the greenhouse. Chilling requirements and scheduling are very strict for successful large-scale tulip forcing. Anyone who is going to spend a lot of money on bulbs, planting media and cooling, would do well to spend $90 on de Hertogh’s book Holland Bulb Forcer’s Guide, which gives very explicit instructions on how to force tulips and other bulbs. (Gloeckner Seed carries it; 800-345-3787).

On a smaller, more casual scale, tulip bulbs can usually be forced by putting them in the cooler in late September at 41°F and leaving them for 12 weeks. Then they can be removed, and taken to the greenhouse. The skin must be removed carefully, then the bulbs planted gently about an inch below the surface of the planting medium. Soil temperature should be kept at 48 to 55°F. Depending on variety and greenhouse temperatures, tulips planted in mid-December should flower for Valentine’s Day. If they are developing too quickly, greenhouse temperature should be lowered, and vice-versa.