Fair Field Flowers is celebrating its 10th anniversary this year. We’re a group of Wisconsin flower growers who collectively market to florists and grocery stores in southern Wisconsin, including Madison and Milwaukee. Fair Field funded start-up operations with a couple of grants totaling $18,500. According to the terms of the grants, we proposed that we’d serve as a model of sustainable development and set up a grower school.  We’d like to share with GFM readers how we’ve developed over the years, and possibly inspire others to take on the challenges of collective marketing.

Our business has experienced a number of shifts, including changes with group members, fluctuations in the marketplace, and new IT systems. When I re-read the article I wrote for GFM in 2004 (see resources at the end of this article), I was surprised at how much we’ve grown. Apparently my head’s been buried in the zinnias for too long. 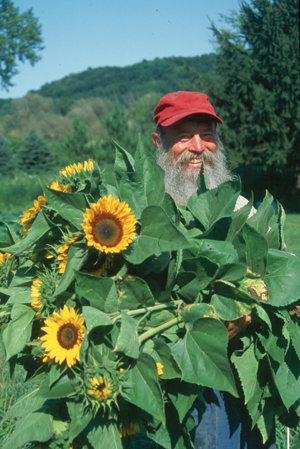 Joe Schmitt, a member of Fair Field Flowers, with a harvest of sunflowers.

How we get the work done
In 2004, we chose to structure our business as an LLC. It’s easier to set up than some other business structures, and it gives us some liability protection. However, we function like a cooperative, and make decisions by consensus. That’s one pattern that’s remained consistent over the years.

To understand our business, it’s important to know how we get the work done, and who does it. At present, the LLC is composed of 10 flower growers. Growers contribute cut flowers, as available, to a van load which is driven around to florists in a “bucket run.” Typically, the van contains product from six or seven growers.

“Our group members have all done something; there’s nobody who hasn’t made a contribution to the group. People do step up, and I totally appreciate that,” said Carol Larsen, one of the group’s founding members.

Over the years, members have traded roles. There have been only a couple of employees who have not also been LLC members. For example, for the first two years, Carol was the driver and the group’s manager. Then a hired employee drove the truck for a couple of years while Carol was still the manager. Then member Joe Schmitt took over as a driver. Later, Jeanie McKewan became the Customer Service Manager (CSM) while Carol still performed some manager functions. Now a new member, Andrea Clemens, has taken over as the CSM.

Although some members do more work, they also get paid for their work. And because LLC members have traded roles over the years, it’s easier for people to see each other’s point of view. Although it might be more efficient to have a stronger manager who would make many of the administrative decisions unilaterally, a cooperative structure has added a richness and depth to our interactions. Although I’ve been at meetings where people didn’t agree with my point of view, I’ve never felt that people were not listening.

Changing customer base
One big shift in our business occurred in 2006, when Joe Schmitt, one of our key growers, had a heart attack inmid-March.  He ended up having heart bypass surgery. While his recovery was speedy, he realized that he wanted to change his business so that it was less demanding. Joe decided to turn his Madison area customers over to Fair Field. At this point we went from doing one bucket run per week to three runs per week. Our sales jumped from $30,500 in 2005 to $69,200 in 2006. At this point Joe also became the driver for the route, a role that he has continued ever since. 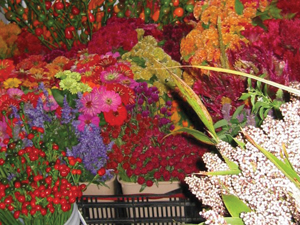 The economic recession affected our sales numbers strongly, and during the period of 2008-2011 they consistently declined. Part of the decline was also due to a shifting marketplace. We estimate that 17-20 area florists have gone out of business during the last decade. We had to drop others because they weren’t purchasing enough to make a stop worth our while. Of the 26 customers we served in 2003, we retained only four. We now make regular weekly deliveries to 79 customers, and 21 of those are on the Milwaukee route, while the balance are in Madison and elsewhere.

We’ve seen a decline in area florists, but a growth in event planners and grocery stores. Of our top customers in 2003, all were florists in Milwaukee or the Milwaukee-Madison corridor. In 2012, our top two customers were Willy Street Coop and HyVee--both grocery stores in Madison. One of the top 10 customers was an event planner, and five were traditional florists with storefronts. Seven of the top 10 customers are in Madison, and the rest are in Milwaukee or the Milwaukee-Madison corridor.

Sales took another big jump in 2012, increasing from $77,100 to $96,200. The change in sales figures was mostly due to pre-orders (orders before the day of the run). Event planners have become a bigger part of our business, and they typically want to pre-order. We had always thought that more pre-orders were a good idea, but with so many growers it was difficult to coordinate everyone’s offerings. With our old system, our sales manager took an order over the phone, and then emailed it to everyone. Sometimes it took many emails to get orders filled and all the details straightened out, which was quite inefficient.

Keeping track of flowers
Last year we implemented a cloud-based system, and it’s improved our efficiency tremendously. We set up a spread sheet on Google that can be accessed by all the Fair Field growers. Our members downloaded the software onto their computers, and then the administrator (the Customer Service Manager), sent an “invitation” to the person who wishes to access the list. More than one person can use and view the list at the same time. The Customer Service Manager constantly updates the list to keep it current. Then members can sign up for orders online.

A key component to organizing pre-orders has been generating availability lists, which had been difficult for group members in the past. Once we got started, though, it wasn’t as difficult as anticipated.
“We didn’t think that we could predict what we could have available in two weeks, and we did really well with that,” said Jeanie McKewan.

Early on, we also implemented a barcode system for tracking inventory. Using Zebra brand software, each floral product is assigned a number and a bar code, which can be printed out on a label and wrapped around one stem in the bunch. The truck driver has a printed sheet of bar code scans which he uses to enter data with a scanner. The truck driver also has an on-board computer. Sales are credited to individual growers and invoices are produced at the site of the sale. This system has had a number of frustrations, such as trying to get Zebra to interface with Quickbooks software, but it’s still basically what we are using.

Growth of local and sustainable
In the 2004 GFM article, we stated that sustainable growing practices were a requirement for membership in Fair Field. We still have the same set of standards with which we started. Although some of our growers are certified organic, or grow on organic farms, we don’t require our growers to be certified organic. When we started our business, our florists loved our flowers, but most didn’t care too much about how they were produced. However, that seems to have shifted, although the emphasis is more on locally grown rather than sustainable.

“The tipping point came about two years ago,” said Carol Larsen. “Now brides are asking for locally grown. We think it came about because of media momentum, and because we’ve got a young and sophisticated market.”
In Wisconsin, our excellent system of farmers markets, CSAs, and programs like “Buy Local Buy Wisconsin” have all contributed to raise the public’s awareness. Most of this attention is directed toward edibles, but there’s a spillover into the flower market. It seems to be primarily the customers that are driving the movement, not the florists.

Extended season
One of our goals was to extend the season so that we’d start deliveries a month earlier as well as continue a month longer at the end of the season. Starting earlier has been more difficult than we thought. Some years we are able to start early, and some years we can’t; it just depends on the weather. We’ve had better luck with running the season longer into the fall, and it’s been possible to ship through the end of October. We have expanded our products to include woodies like red twig dogwood and willow, as well as dahlias and mums. During the past 10 years, a number of us have constructed hoophouses, which provides more diversity for both ends of the season.

Growers School
Under the terms of the original grant, we set up a grower school with John Hendrickson of the Center for Integrated Agricultural Systems, or CIAS. As a side note, CIAS sponsors several other grower schools at the University of Madison, including ones for vegetables, apples, and berries. The two-day school is usually held on a Saturday and Sunday, from 8 a.m. to 4:30 p.m. The Wisconsin Cut Flower Growers School is generally held on alternate years; the next school is scheduled for February 2014.

Each year the instructors build the course a little better. A PowerPoint presentation allows attendees to see photos, which is invaluable since the school takes place in February. There’s also an extensive show-and-tell with a range of tools and plants growing in flats. Joe Schmitt also sets up a harvest demonstration with some flowers gleaned from a wholesaler. He staples the flowers to a 2”x4” and then proceeds to “harvest” them using one of his favorite tools, a small Japanese rice sickle which works on the pull stroke.

“On the last day, we bring in a panel of flower buyers. They talk about trends, and what they are looking for when working with a local grower,” said Hendrickson.

The school is quite popular, and usually fills up with 25-30 participants. Part of the popularity is due to the smaller number of educational opportunities for flower growers.

“Each year, one to three people in the class have come from far away—states such as Colorado, Missouri, Nebraska, and locations on the east coast,” commented John Hendrickson.

For the future, John has considered pairing the grower’s school with a summer field day so that class participants can see flowers actually growing. He might add a networking component so that new growers can contact each other with questions. A separate school for advanced flower growers would be another option.

Future growth
We’ve got plenty of ideas for future growth, including more marketing efforts towards florists and the general public. We’d also like to recruit some new members, since we have two or three growers who will retire in the next few years. With sales on the rise, Fair Field should provide good opportunities for younger growers who need a hand getting started. And sometime in the near or far future, it would be nice to have a permanent location for our business, and to make the “bucket runs” obsolete in favor of more space and greater flexibility.

“There’s no reason why Fair Field can’t continue for the next 10 years,” said Jeanie McKewan, “and I hope it will.”