You are here: Home » Archive » Getting cover crops planted

Cover crops are a big part of my fertility program. I use them in an attempt to keep nutrients cycling in the soil, to improve soil texture and organic matter, to add nitrogen, to displace weeds and to provide habitat for beneficials. Because cover crops aren’t directly generating income like a cash crop, it’s hard for me to give them as much attention as they deserve. That said, they can be quickly and easily seeded using some pretty basic tools and a bit of planning. 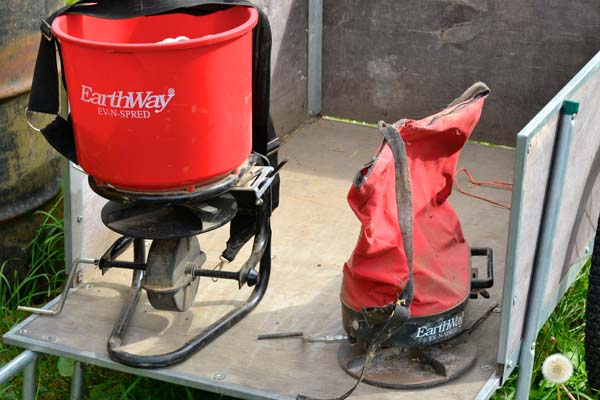 The most common tool for seeding that I’ve seen on small farms is a simple shoulder bag style broadcast spreader, or what I call a “belly grinder.” If you haven’t seen one, it has a bag with a shoulder strap that holds about 10-15 pounds of seed. There’s a hand crank that spins a horizontal disk at the bottom. A latch with adjustable stops on the opposite side of the crank opens a hole in the bottom of the bag, dropping seed onto the spinning disk. The adjustable stop on the latch determines how much seed flows, and the spinning disk then throws the seed out in front of the seeder. Depending on how fast you spin the crank and how fast you walk, you can adjust the width of a pass and the seeding rate (pounds of seed per acre). After broadcasting, you need to work most seeds into the soil with some sort of implement.
On a large scale you could also use a spin spreader on the back of a tractor for broadcasting, but that takes tractor set-up time and for less than several acres might not be worth the time. A drop spreader is another option. Drop spreaders only spread the width of the actual spreader, they lay down the seed more evenly, open and shut without wasting seed at the ends of rows, and aren’t as affect 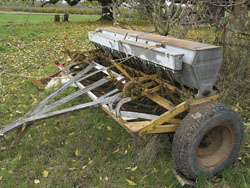 For very even seeding and germination, a grain drill is usually the tool of choice. Drills are much more expensive, take more time to set up and more maintenance, and sometimes are limited to smaller seeds, but they will place the seed more accurately at an even depth and not require another pass to work the seed into the soil. There are many styles of drills from very narrow vineyard drills for seeding between vine rows, to huge wide drills for seeding thousands of acres. Different drills have different seed boxes as well, depending on what size seed they are intended for - small grass seed, or larger legumes, or something in between. Some drills have separate seed boxes, which allow the drill to be used to seed a grain and a legume at the same time and to meter each type of seed separately.

Two simple approaches
The belly grinder has been my main cover crop seeding tool for many years. My basic approach to using the belly grinder in an open field is to first prep the field so that it’s relatively smooth and flat. I’ve used implements ranging from a spading machine to a light disk to achieve a decent surface, but the best is when I’ve used them in conjunction with a Cultipacker which breaks up clods and creates little ridges and furrows a couple of inches apart. The ridges seem to catch the seed nicely, and the firm surface is nice to walk on and also improves seed germination.

I fill the bag with seed, set the stop on the latch, line up half a pass width from the edge of the field and a little back from the edge, start cranking at an even rate and start walking toward a point in the distance that I think will give me an even line down the field.  As I hit the edge of the field I open the latch to the stop and without breaking my stride I keep the latch open until I’m within a few feet of the end of the field. Then I walk over, one full pass width, turn around and start back.  Depending on the seeding rate, and the length of the field, I generally leave the bag of seed on one end of the field and make sure to refill when I get back to that end.

The width of the pass depends on individual cranking rate and on the seed size. You can usually see signs of the seed hitting the bare ground as you walk so I pay attention and make notes for the next time. Generally a pass is about 16’ wide for me, but it depends on the seed. I calibrate a rough seeding rate by starting with the scale, which is usually on a label on the bottom of the seeder. Then I calculate the amount of seed I think I should use in a pass and weigh the seeder at the beginning and end of a pass. I can then make small adjustments to the latch stop. I keep records of these numbers from year to year. The numbers on the latch are not a linear scale, meaning 3 is not twice the amount of seed as 1.5, it’s just more, and probably quite a bit more.

After I spread the seed I usually try to work it in shallowly. Again, I’ve used everything from a spading machine to a spring tine rake to work in seed, but the best is a Cultipacker.  A rototiller off the back of a tractor without the PTO engaged actually works pretty well to scratch the seed in and the gate, or following roller helps press the seed in.
One of the nice things about using the belly grinder is that it is inexpensive and very versatile. It gets you out walking in the field and it works even with heavy trash in the field, or to over-seed an existing crop. It also works with pretty much any size seed from very small clovers all the way up to large bell beans (round-seeded favas). Even though it requires walking, it covers a lot of space pretty quickly, and you can do narrower spaces by spinning the crank very slowly (a tricky thing to do, requiring some practice).

For narrow spaces and more even stands I’ve come to prefer using a drop spreader followed by a Cultipacker. The drop spreader won’t handle very large seed, but it does a good job with seeds up to small vetch size. It is especially nice for seeding next to and between existing crops where the broadcast spreader has a tendency to get seed into the beds being cropped, creating a weed. This is especially common for me in summer cover cropping situations.

For cool season cover crop the basic mix here in the Northwest is cereal rye and vetch (usually common or hairy). I prefer roughly a 20/80 mix of rye to vetch. Sometimes I can get this mix straight out of the combine working with growers in the region, but usually I have to mix it or have it mixed. I’ve been using about 120 pounds per acre but recently I’ve experimented with rates closer to 300 pounds per acre and the  weed suppression and winter soil coverage is much better, so it might be worth the extra expense. Eric Brennan from the USDA first mentioned this approach to me and his OFRF funded study on the topic can be found at ofrf.org/funded/highlights/brennan_04f06.html.

In Northwest Oregon I’ve found mid September through mid October to be the best seeding window. Earlier seedings have to compete with summer weeds and later seedings don’t germinate as strongly. When I don’t get a cover crop in by then I can usually seed the same mix in late January or early February which gives a similar germination rate, but the cover will grow faster as the soil warms up in March, helping it outcompete winter weeds. I do sometimes use favas in the mix to add more N and diversity to the mix. Favas I just add on top at about 30 pounds per acre.

For warm season cover crops in our cool climate I use buckwheat or sudan grass.  Buckwheat is very fast, starting to flower in 4-6 weeks, depending on the time of year and the weather. I use buckwheat where I have a very short window to fill. The flowers remind me to work in the crop, which also helps reduce weed pressure by taking out any weeds before they have a chance to go to seed as nothing is really faster to seed for us than buckwheat. My seeding rate for buckwheat is about 60 pounds per acre.

I use sudan grass as a summer cover in fields that are going to be in cover crop for an extended period. I can keep sudan grass going all summer by mowing it to the ground any time it starts to head out, or if weeds start to go to seed. Sudan will easily winter kill for us. If a sudan field is going to sit through the winter as well, I’ll usually overseed red or crimson clover in the early fall after a mowing. The clover comes up with winter rains through the winter-killed sudan and allows a cover crop without working up the ground an additional time. I use red clover if the field will be resting for an extended period, and crimson if it will be worked up in the spring as it’s easier to kill and shorter lived than red clover. My seeding rate for sudan is about 90 pounds per acre.

Because cover crop seeding can be difficult to fit in, I try to keep good records of seeder settings in a convenient place, and to always have extra seed on hand. That makes it easy to run out and throw seed in quickly when there’s an open field. I track open fields, how long they’re scheduled to be open, and what the next crop is using planning maps (GFM Feb 2010). With these two aids and a few very simple seeding tools, it is far easier to always turn available space into productive cover crops and not let them sit and get weedy.

Josh Volk farms near Portland, Oregon, and consults with farmers around the country. Contact him through www.slowhandfarm.com.