How farmers in the Upper Midwest are adapting to changing weather

Across parts of the Upper Midwest, farmers relayed strikingly similar stories of how changing weather patterns are affecting their farms. In May 2018, Alex Ball — owner of Old City Acres, a no-till market garden in Belleville, Michigan — lost almost everything in his fields to torrential rains. Alex describes his farm’s suburban neighborhood as basically wetlands where flooding has always been an issue. So, dealing with water issues wasn’t entirely unexpected. Still, the past several years have brought spring rains that have been unusual in both duration and intensity. 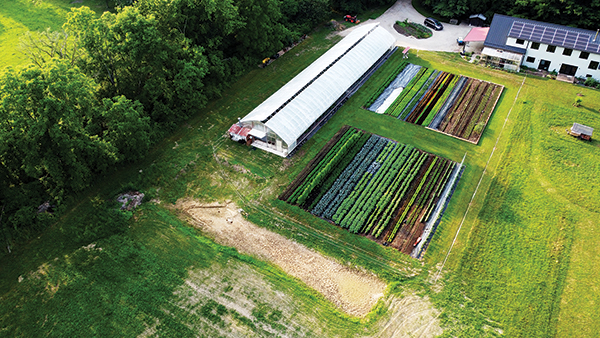 After substantial flooding in 2018, the city of Goshen, Indiana asked Clay Bottom Farm to construct a pond on the property to retain runoff from buildings on the farm. Photo courtesy of Ben Hartman.

In response, Alex has become a quasi civil engineer, constructing hundreds of yards of ditches, drains and levees to direct water across the farm. As Alex explains, after the first few severe weather events that impacted the farm, he quickly learned to be preventative when it comes to water management.

Shortly after moving his farm to its current property in early 2018, he began erecting approximately 300 feet of three-to-four-foot tall levees. He did half of the work by hand, largely because the entrance to the farm was still too wet to get a front-end loader in. Maintaining and improving the levees is now simply a part of the farm’s annual maintenance. Besides the levees, Alex installed hundreds of feet of drainage ditches, most half a foot wide and half a foot deep. Many of the drains are lined with landscape fabric or left open, but in especially high-flow areas Alex uses French drains.

In Goshen, Indiana, Ben Hartman (author of The Lean Farm and The Lean Farm Guide to Growing Vegetables) owns and operates Clay Bottom Farm, a half-acre urban farm. In many ways, Ben’s experiences with changing weather patterns echo Alex’s. Summer rains are less frequent, but increasingly intense when they do arrive, he said. Goshen flooded in 2018, causing damage to homes and businesses. Afterward, the city asked Ben to construct a pond to retain the runoff from buildings on the farm, including its 5,000-square-foot greenhouse and future hoop houses. They finished excavating the pond this spring.

To deal with flood waters on the farm, Alex Ball of Old City Acres installed hundreds of feet of drains and levees across his property. Photo courtesy of Alex Ball.

Ben has also been implementing infrastructure-related solutions to address the dry spells between summertime rains. This includes running drip tape to all the crops as well as purchasing more advanced timers for misting greens on especially hot days.

At Old City Acres, Alex also has dealt with drought-like conditions in recent years. The past several summers have been some of the driest he has had to contend with in his 10 years of farming. Alex launched his first farm at 18, fresh out of high school. One of his primary strategies in dealing with dry conditions has been to add more organic matter to his soil, largely compost. In addition to helping with water retention in times of drought, organic matter also improves drainage when the heavy rains arrive in the spring, he said.

Both Ben and Alex described how changing weather patterns are pushing them to move more and more crops under some kind of cover. Of the fourth of an acre that Alex has in production at any given time, a decent percentage is already covered by high tunnels. He currently has a total of six high tunnels: a 12-foot-by-25-foot propagation house, a 30-foot-by-50-foot tunnel, two 15-foot-by-50-foot tunnels and two 15-foot-by-100-foot tunnels. Initially, several of the tunnels were caterpillar tunnel-like designs that he made permanent by driving in ground posts. 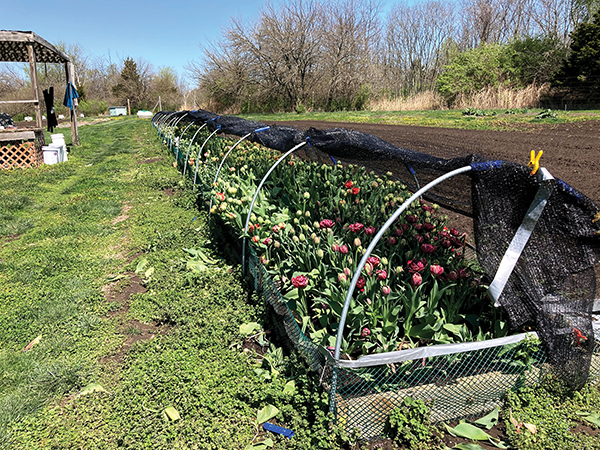 Ben also anticipates a future in which small farms like Clay Bottom will grow a greater percentage of their crops under some kind of protection. This year, for instance, Ben built a 26-foot-by-70-foot cold frame that uses cables to hang interchangeable covers over the crops.

At Bel Fiore Farm (“beautiful flower” in Italian) in Lee’s Summit, Missouri, Angela Turner has found increasingly inconsistent temperatures to be one of the biggest challenges for her flowers. In Angela’s experience having grown up in the region working in garden centers, temperatures in northwestern Missouri are becoming less predictable and more extreme. Among other things, these temperature changes can wreak havoc on a flower grower’s harvest schedules, especially when it comes to overwintered bulbs or tubers. In both 2020 and 2021, for instance, Angela’s dahlias ran about five weeks behind their typical schedule. Her tulips, on the other hand, were several weeks ahead this year, most likely because of warmer soil and air temperatures throughout the winter.

At Pepper Harrow Farm — a 20-acre flower farm in Madison County, Iowa, just southwest of Des Moines — Jennifer O’Neal also has noticed substantial swings in seasonal temperatures. In her experience, springtime temperatures have generally become warmer earlier, but with frosts arriving especially late. Aside from the obvious dangers that these late frosts can bring, warmer spring temperatures also come with their own set of issues. For instance, their anemones haven’t responded well to the unusually warm soil in the spring. So, they’ve started to experiment with some cooling practices, including growing the anemones in tunnels that can be covered with shade cloth.

Across the board, farmers described a need to be flexible and adaptable as local weather patterns continue to change. Beyond various infrastructure adaptations, such as constructing levees or additional high tunnels, growers also discussed more fundamental changes to their growing strategies. At Bel Fiore Farm, for instance, Angela describes constantly seeding new crops to quickly bounce back from unexpected crop failures.

Ben of Clay Bottom Farm also described new approaches he has been contemplating in the face of changing weather patterns. He relates a need to acknowledge new growing season constraints in northern Indiana. For instance, the “success windows” for many crops are narrowing, and with them the harvest ranges as well. This has translated into pushing the boundaries of the seasons less, and an increased focus on getting the optimal timing just right.

In some cases, changing weather patterns can bring new opportunities for growers.  Although unusually warm winters come with a host of issues, they’ve also allowed Pepper Harrow Farm to experiment with some new growing methods or with new crops entirely. For the first time ever, Jennifer has started to overwinter snapdragons for a spring harvest. She’s also recently started to grow lavender, which previously would have been unthinkable in Zone 5b.

As Alex of Old City Acres explained, unpredictable weather throughout the main season has been a primary motivation behind his recent foray into winter production. Expanding into four-season production has improved the farm’s economic resiliency in the face of changing weather patterns. In Alex’s region most farmers traditionally don’t grow into the shoulder seasons. So far, he’s one of a few farms in the area to offer produce throughout the winter.

Turning to the science, many of the trends that farmers across portions of the Rust Belt, Midwest and Great Plains noticed will probably continue over the coming decades. And new changes are likely as well. Although the Midwest, for instance, hasn’t yet experienced substantial summer warming, the most recent National Climate Assessment finds that in the coming decades summer temperatures will increase more in the Midwest than anywhere else in the country.  For farmers across the region, changes like this will mean more adaptation and collaboration to find solutions.

Robin Hackett is a farmer from Massachusetts where he previously managed Red Shirt Farm and Beetlebung Farm, two low-till market gardens. Prior to farming, Robin worked in professional kitchens and studied environmental policy. He currently lives in Ohio and is working towards opening his own farm.