Post your farm-made tool with #toolsforgrowingformarket. If Josh picks your tool for an article, you win a $50 tool gift certificate and a Full Access sub to Growing for Market Magazine.

This article originally appeared in the June/July 2021 issue of Growing for Market Magazine.

Spring Forth Farm in Hurdle Mills, North Carolina, posted this dual-purpose tip for both trellising and protecting taller crops with floating row cover:

Just wanted to share this image of our butterfly ranunculus (taken April 9), which shows both an alternative to flower support netting and a method for protecting crops which are too tall to put hoops over from a very late frost or freeze.

So if you use netting you know what a pain it is to harvest flowers through it, especially branchy flowers like this butterfly ranunculus. We put in t-posts at the end of the bed and red metal electric fence posts (from Tractor Supply) down the length of the bed and then ran rope tightly down the length. I tied the rope to the post using clove hitches, but you could use plastic zip ties as well.

This worked really well for butterfly ranunculus, but it’s not ideal for every crop. It didn’t work great for our bells of Ireland, but perhaps taller and top-heavy crops like bells and snaps just need a second rope higher up. Because they have longer and non-branching stems, I think there is less benefit from using this system over netting with those crops anyway. (Thank you @firesidefarmnc for this great idea.)

For frost protection on tall crops, we use the same posts. We put tennis balls over the tops (they are easy to cut a slit into), and then run twine as tightly as possible high up on the posts. (THE TWINE IS NOT PICTURED. It makes harvesting difficult and I had already removed it by the time I got around to taking the picture.)

The post caught my eye for a few reasons and raised a few questions for me, so I reached out to Jonathan at Spring Forth Farm to get more details. The posts looked like coated rebar to me, but it turns out they also have a little spade attached to them that, in soft enough soil, can be used as a foot step to push them in and also keep them from tipping over. 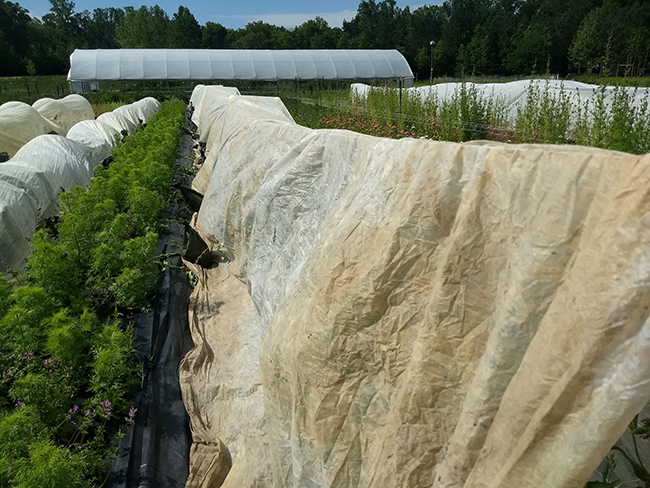 If used in the field for frost protection, the row cover needs to be wide enough to place sand bags or some other weight on the edges to anchor the cover. Images courtesy of Spring Forth Farm except where noted otherwise.

They’re 48” long and I’ve used a similar support system for peppers for many years. But instead of metal posts we use 48” wooden grade stakes from our local lumber yard, pounding them in with a t-post pounder. I suspect the metal posts are a bit heavier and they’re about four times the price. 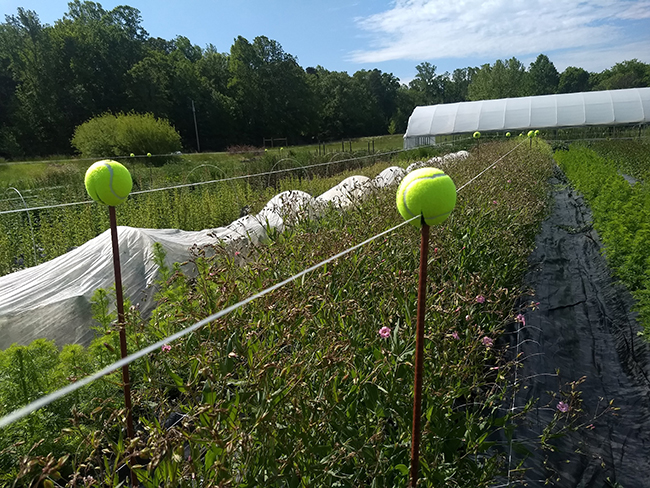 Here’s what the system looks like without the rowcover.

Doubtless they’d last more than four times as long as the wooden ones we use, which is about four years. Like Spring Forth Farm, we also use heavier duty t-post for the ends of rows, angling them slightly to ensure that the tension on the lines isn’t pulling the posts out of the ground. I didn’t ask the spacing they’re using between posts (we use 4-6’ in the row depending on the variety).

Instead of rope, we use orange poly bailing twine and give a single wrap around each post. I asked Jonathan about the clove hitch, and he thought the advantage of the clove hitch, which is only moderately trickier to tie than using a single wrap, is that it holds the tension in the line as you go, and you can stop at any point as you’re putting up the line without losing tension. It also ensures that if the rope or twine breaks between any two posts you don’t lose tension anywhere else.

Like he mentioned in his caption, we use two layers of twine and find that at least for pepper plants it helps keep the plants from snaking their way under the higher twine. He’s using the rope mainly to keep the stems out of the pathways, and the plants are largely self-supporting in the middles of the beds. We’re planting double rows on a 30” bed and find it helpful to also add a zig-zagging layer of twine internally to both keep the posts from wanting to tip out into the pathways, and to add a little internal support.

When I first saw the tennis balls on the posts I thought, “That’s a great way to prevent people from poking their eyes on those posts!” (Always thinking about safety!) But it turns out they’re actually using the posts to support floating row cover early in the year when conditions get colder than ideal. 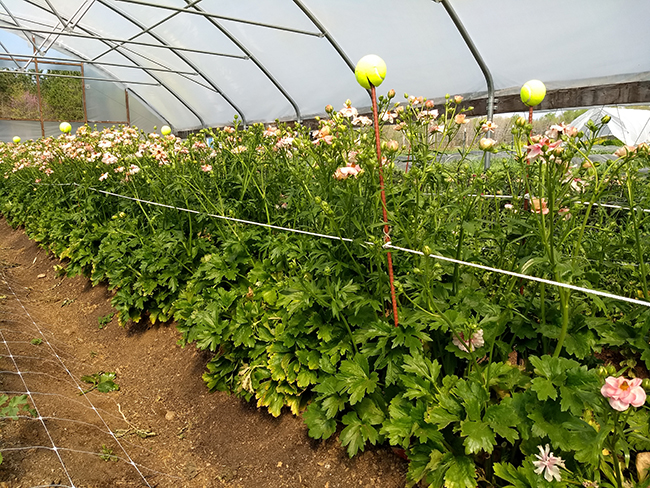 This low trellis system can be set up for support in a hoophouse.

It’s not shown in the picture, but Jonathan clarified that they run twine, just like the rope, right at the top of the posts. The tennis balls are slitted with a box cutter, so they slip right over the twine and protect the row cover from the posts. In the tunnel where there’s no danger of wind it works with 10’ wide row cover, but in the field, they need wider row cover to have enough at the bottom to hold down with sandbags. I’ve also seen this technique used on posts that hold up bird netting in the past, and even on much taller t-posts in tunnels that are trellising tomatoes and need a bit of extra insulation. 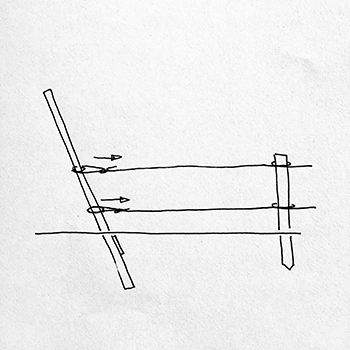 Above is setting the end post at an angle, the tension on the strings pulls the post further into the ground at the same time as it tries to tip it vertically. If you set the post vertically, as the string pulls it over slightly it will also start to pull it out of the ground. Below is the twine pattern I use in peppers as seen from above. X’s represent the plants, and O’s represent the posts. The first twine wraps each post and stays outside the plants. A second length of twine, at the same level as the first, zig-zags, wrapping each post and crossing back and forth, holding the posts together and providing some extra support for the plants between the rows. Drawings courtesy of the author.

This has been Spring Forth Farm’s first year using the system, which they got from seeing it in use at another farm. I’ve been using versions of our similar system for almost 20 years now, but I might have to get some of those metal posts with tennis balls this year to see how well they’ll work in our rocky soil.

Josh Volk farms in Portland, Oregon, and does consulting and education under the name Slow Hand Farm. He is the author of the book Compact Farms: 15 Proven Plans for Market Farms on 5 Acres or Less, available from Growing for Market. He can be found at SlowHandFarm.com.