This article originally appeared in the May 2021 issue of Growing for Market Magazine.

And, for a not-very-practical but mind-blowing article about the bonkers festivals that preceded modern sagre, read this article: The Forgotten Italian Tradition of Building Monumental Food Palaces, then destroying them in a literal hunger games. It has to be read to be believed https://www.atlasobscura.com/articles/cuccagna-italy-food-tradition

In the United States, California-grown, round, red Chioggia-type is the most commonly found radicchio on grocery store shelves, but there is a lot more to the Cicoria (chicory) story. Pacific Northwest farmers are growing a much wider variety of radicchio types, including Treviso, Castelfranco, Lusia, Verona, Rosa and Puntarelle. Consumers have started craving their under-appreciated bitter flavor.

Radicchio is a cool season vegetable that originated and is still widely grown in the northeastern region of Italy, a climate and latitude very similar to the Pacific Northwest of the USA and bordering regions of Canada. It is a promising winter crop as it overwinters in the field and holds well in storage, providing a locally grown alternative to lettuce shipped from warmer regions during colder months.

On the Radicchio Expedition 2020, Italian farmer Myrtha Zierock translates for the group. Photo by Shawn Linehan.

Many farmers in Oregon and Washington are interested in growing radicchio but have production questions ranging from seeding to storage with little of this information available in North America. For this reason, Washington State University (WSU) Food Systems Program and the Culinary Breeding Network (CBN) were awarded a three-year grant through the USDA Specialty Crop Block Grant Program to establish radicchio as a staple leafy green in the Pacific Northwest.

The “Building Capacity and Support for PNW Radicchio Production Through Market Expansion and International Exchange” project goals are to create a PNW Radicchio Association; increase awareness and consumption of radicchio through educational and culinary events; and develop opportunities for international information exchange. PNW Radicchio Association lead Siri Erickson-Brown shared: “We believe this project has substantial potential benefits to our farm and other vegetable farms in our region. Year-round sales are important to our business and employees. Winter sales improve our cash flow, profitability, and our ability to retain employees.” 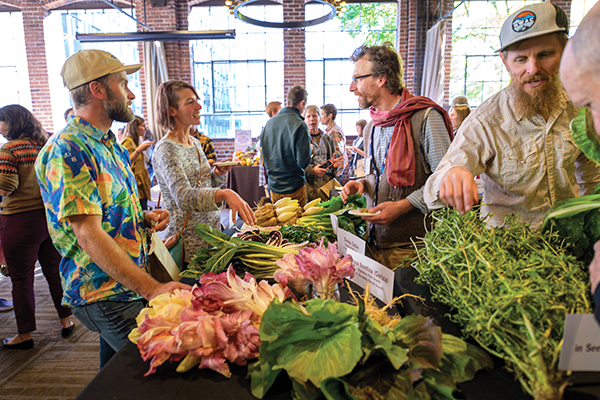 Radicchio demand has increased exponentially over the past decade and recent years, according to growers in the Pacific Northwest and northeastern U.S. Project farmer-collaborators Erickson-Brown and Jason Salvo of Local Roots Farm in Duvall, Washington, report: “Gradually, we have developed a large enough market for radicchio that it now comprises about 15 percent of our total acreage, and accounts for 10 percent of our farm’s total annual sales. Only carrots and lettuce exceed radicchio in terms of total dollars per year.”

Leading up to this grant, radicchio was promoted through Chicory Week, which according to Salvo in his Medium article “The Roots of the Radicchio Revolution in ‘the Veneto of North America’” is a ragtag group of people who, for a variety of reasons, have undertaken a mission to get more people to eat radicchio and other chicories. Chicory Week began as a grassroots team comprised of Local Roots Farm, Culinary Breeding Network, Uprising Seeds and two restaurant partners — London Plane and Tom Douglas Restaurant Group — who organized the Sagra del Radicchio in Seattle in 2018 and 2019. Simultaneously, CBN organized annual Winter Vegetable Sagra events in Portland, Oregon, (2017 through 2019) which included radicchio as one of the nine featured vegetables.

In 2020 due to Covid, both Sagra events transitioned online. Sagra del Radicchio becoming RadTV for an all-day celebration of radicchio while the Winter Vegetable Sagra included nine weeks of virtual programming from December 2020 to March 2021. The Sagra events featured presentations exploring radicchio history and culture; nomenclature of types; cooking demonstrations; forcing techniques; and virtual farm tours. Presentations were watched by thousands in the United States, Canada, Italy and beyond. Sessions were recorded and you can view them on the Culinary Breeding Network YouTube channel. 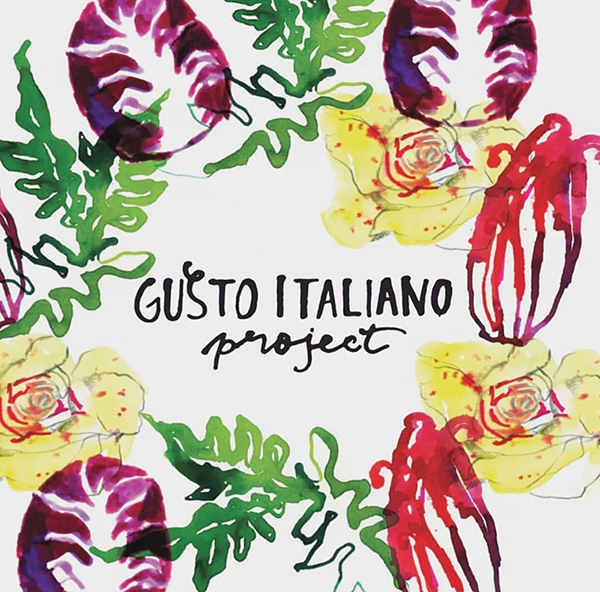 In the past, I heard farmers share their frustrations with the quality and variability of radicchio seed available in the U.S. In 2014, after attending Terra Madre as a U.S. delegate, I visited T&T Seeds, the world renown radicchio seed company in Chioggia, Italy, with farmers Josh Volk and Alex Stone. (See Volk’s article: “How to grow heading chicories” in the November 2016 GFM.) The visit was illuminating as we learned basic practices not commonly known in the U.S. We left with more questions than answers and a feeling that it would be difficult to educate farmers on how to better grow the crop without a great deal more information from Italian growers.

In January 2020, a second trip was organized with 22 farmers, chefs, advocates, journalists and photographers from Oregon and Washington. This Radicchio Expedition was organized and led by my friend and Italian farmer Myrtha Zierock of Azienda Agricola Foradori in Mezzolombardo, Italy. Over five days, we visited production farms, seed companies, radicchio breeders and packinghouses in northeastern Italy where the crop is widely grown. Our mission was to learn more about production methods and culinary uses to bring back that information to growers, cooks and eaters. Volk wrote about this trip in  “Learning about forcing chicories in Italy” in the March 2020 GFM.

With the three-year USDA grant, WSU and CBN plan to organize an annual Grower’s Symposium to share with a wider audience the information we learned during the Radicchio Expedition. We also plan to continue this mutually beneficial international exchange of farming techniques, culinary uses, and cultural background and traditions with Italian growers. We still have numerous technical questions about seed selection, planting dates, cultivation, forcing methods, harvesting techniques and storage to investigate. Meanwhile, the Italians are energized by our curiosity and perspective about this culturally significant crop that is beginning to lose popularity in its home country.

The Radicchio Expedition resulted in a new collaboration between Culinary Breeding Network, Uprising Seeds and northern Italian vegetable breeders and seed company Smarties.bio. Knowing that quality radicchio seed access is a significant issue for farmers here in the U.S., we saw an opportunity to do something about it. The project was born primarily from a mutual love of radicchio and a desire to further establish it as an anchor of the fall and winter produce season here in the North America.

The roots of the project took hold back in 2014 during that trip to northern Italy when Volk and I were Terra Madre delegates. We met a young aspiring Italian plant breeder Andrea Ghedina in Chioggia at T&T Seeds on that same trip. We visited him in a quest to learn more about growing radicchio and with my personal hope of seeing the then elusive ‘Rosalba’ pink radicchio, which was not yet a thing in the U.S. and rarely seen outside northeast Italy.

Ghedina and his then colleague Samuele Pellegrini, now owner of the Italian Levantia Seed company, spent a full day with us visiting radicchio farms and packinghouses. It was a fantastic day even though I didn’t get to see pink radicchio. I thought of Ghedina every radicchio season afterward, although we did not stay in touch. Not until just before the 2020 Radicchio Expedition, when Ghedina contacted me through Instagram. He went back to school to study radicchio breeding and started his own company — Smarties.bio. He met up with the Radicchio Expedition group and over an epic lunch of 15 radicchio dishes, Ghedina asked if I would be interested in forming a collaboration with Smarties.bio and Uprising Seeds to bring his seed to the North American market, hence the Gusto Italiano Project was born.

Through the project, Uprising Seeds is offering this special line of certified organic open-pollinated radicchio and regional specialty brassica seeds, bred and grown in Italy by Smarties.bio in Chioggia, Italy — the heart of radicchio’s motherland. Smarties exists at the meeting point of tradition and innovation, bringing years of modern breeding experience to classic, culturally significant vegetables of their region.

Through Instagram and our websites, Culinary Breeding Network (@culinarybreedingnetwork) and Uprising Seeds (@uprising.seeds) will be sharing a great deal of content to give culinary and cultural context to these seeds and providing detailed growing information, offering traditional recipes and cooking videos, and working to create shared community through these foods they love.

Lane Selman grew up on a citrus farm her Sicilian great-grandparents planted in 1919 on Florida’s space coast. She studied Agronomy (BS) and Entomology (MS) at the University of Florida before moving to Oregon in 2000. Lane is a Professor of Practice at Oregon State University where she has worked with organic vegetable and grain farmers, managed collaborative research projects, and planned outreach events for 15 years. In 2011, Lane created the Culinary Breeding Network to build communities of plant breeders, seed growers, farmers, produce buyers, chefs and other stakeholders to improve quality in vegetables and grains. She currently serves on the Portland-Bologna Sister City Association board. Lane loves a sagra; read more about that in her article: How Italian Sagre Inspired the Culinary Breeding Network’s Joyful Celebrations of Local Vegetables at https://tinyurl.com/2tu4vkrw.