Food and food production stirs up feelings in people. It is one of the things that I love about being a farmer — we can open up deep wells of feelings and connections for people as we feed them. The downside, though, is that the idea of urban agriculture — of neighbors growing and selling down the block or of chickens in a coop in someone’s back yard — can stir up negative emotions that are hard to respond to. We like healthy food, we like fresh eggs, but as a society we’ve got a lot of emotional baggage that is not so positive around how those eggs and food are produced.

Animals in the city
In Kansas City, we’ve had some very funny conversations with city officials about chickens and goats in town. Inevitably, animal manure comes up, with the frame of reference for city dwellers being, of course, dog manure. The thought of dog manure results in wry, resigned facial expressions; the management of people and their poopy dogs is a big issue for city officials. But the thought of chicken or goat manure sets off facial twitches and sophomoric joking. Chickens and goats seem to stir up disgust, discomfort, and even, for some, anger.

“What about diseases?”
This question was raised by a local city councilwoman when she was visiting Bad Seed Farm to sort through their codes issues (referred to in the last issue). The councilwoman, farmers Dan Heryer and Brooke Salvaggio, and I were sitting on the back patio, drinking coffee and discussing the situation. When she asked the question, I looked at Dan, he looked at me, neither of us had an answer. Later we admitted to each other that we internally panicked — had we missed something? Were we threatening public health in advocating for urban chickens and goats? To warrant such strong emotional responses, there must be something we weren’t taking into consideration.
So we began to investigate. Are there diseases we should worry about that are specific to chickens, goats, other small livestock? What about dogs and cats; aren’t they a vector for animal-human disease transmission? Could goats or chickens possibly be as potentially dangerous as dogs, hosts to rabies and sometimes aggressors with strong teeth and jaws?

The list of animal-human diseases is impressive: Cat Scratch Disease from both dogs and cats.  Campylobacter, which can be spread by dogs and cats, as well as the farm animals that might end up in an urban livestock situation. Hookworms, tapeworms, roundworms seem mostly to come from dogs and cats. Lyme disease — dogs.  Rabies — dogs, cats, cattle, but mostly raccoons, skunks, bats, and foxes, all of which we find in our cities. Cryptosporidium — again, dogs and cats, as well as farm animals. Toxoplasmosis — a risk for pregnant women when cleaning cat litter boxes, and interestingly, they can get it from sheep, too. One big fear is Avian Influenza — in spite of the fact that the U.S. has had no cases of bird influenza and the Department of Heath and Human Services okays the keeping of backyard poultry.

I had no idea the risks I was running with our two dogs and three cats! But, on the other hand, after nearly 40 years of living in cities and a good amount of time living on farms, I’ve never known anyone to get sick from their animals.

Noise?
Most of us have seen the commercial on TV where a sleeping urban dweller is awakened by a crowing rooster perched on his bed.  There are toddlers’ toys designed to teach us about farm noises — they are some of the earliest images and sounds we are given. Mooing, baaing, crowing, cackling — we all know in our heads how very noisy farm life is and that we don’t want to be awakened by a rooster!

But what is the reality? The 2009 World’s Loudest Dog (an actual contest in England) was recorded at 108 decibels, with more typical dog bark volumes between 50 and 100. Rooster-less industrial chicken coops, according to the National Ag Safety Database, are at 60-70 decibels, the same as human conversation. Lawnmowers, leaf blowers, teenagers with souped-up cars are easily as loud or louder than the baaing of goats.

Animal accommodations
We’ve learned to live with the risks and inconveniences because we love our cats and dogs, they make our lives better.  Because of that love, we feel okay spending public funds on the public health risks associated with cats and dogs, we agree to licensing, vaccinations, and nuisance/noise codes. These management tools don’t always work, as people get attacked by dogs, raccoons feast on cat food at back doors, we’ve all stepped in dog poop at the local park, but on average, we’ve figured out how to live with animals in our cities. Extending those solutions to include chickens and other small livestock is perhaps not such a logistical stretch. The negative emotional associations and beliefs, though, are the ones that bring folks out to testify at public hearings and that leave us scratching our heads, at a loss on how to address them.

Commerce
A neighborhood farm might want to hire some help and bring in some volunteers. They might want to offer workshops and learning opportunities. There may be retail activities, seasonal farm stands, people you don’t know parking on your street. Temporary farms stands might be erected, a small advertising sign, fences, the paraphernalia of small-scale production.

These urban farming activities are going to change the residential character of some neighborhoods. And while we would look at this traffic of people and cash and feel happy that all of these folks are eating well and connecting to the farmer and each other, others are going to just be really upset that there are people on the street, cars, and cash transactions.

They also most likely have an inaccurate picture in their heads of how extreme the activities will be. Practically speaking, farms of less than ¼ acre, which in many cities is about the size of three or so city lots, won’t have the budget to pay for a lot of help. They won’t be able to manage more than a few volunteers. And the yields off such a plot won’t support more than a limited number of customers. The size of the farm will limit its capacity to attract employees, volunteers, learners and customers.

So how do we build in appropriate levels of neighborhood control? Nearly all businesses in cities have to conform to standards around parking, hours of operation, screenings, and set-backs. If part of the process of starting an urban farm required that you apply for a special use permit, enlist the support of your neighbors, and work with elected and city officials, what really would be the downside? They might say “no” but if that is the case, perhaps farming there isn’t your best option or more groundwork with the neighbors is called for.

The public good
There are some activities we allow in residential neighborhoods, recognizing their benefit to our lives — schools, churches, parks. While schools and churches aren’t “commercial” by definition, they are in effect. They have employees and “customers” who arrive in cars, buses, and on foot. They receive deliveries and are public gathering places. Their buildings and parking lots are generally larger than the neighborhood norm.
We live with them because of their benefits to us; we have placed a public value on education, on spiritual life, on exercise and recreation.

Can we imagine placing locally grown food in this category of public good, in spite of our “for-profit” status? In this time of out-of-control obesity, diabetes, and heart disease, in this time of inner cities emptying out, leaving behind huge swaths of empty lots and reduced economic activity, can we imagine recognizing that urban farms offer a unique public benefit and can be an important contributor to public health and well-being? And that the benefits may outweigh the inconveniences?

Living together in human communities is all about balancing competing interests and a wide range of emotional responses to different aspects of communal life.  As we begin to transform our cities into food-producing places, we need to enter with good faith into those oh-so-human activities of advocacy, negotiation, compromise, and reconciliation that make our communal lives possible. We need to speak to facts and to emotions, even when we don’t understand or agree with the emotions or the history that may have created them. And we need to keep the long view and the patient view, and know that we are in leaders in a fight for healthy humans and healthy cities.

Katherine Kelly is executive director and farmer for the Kansas City Center for Urban Agriculture. She can be reached at katherine@kccua.org. 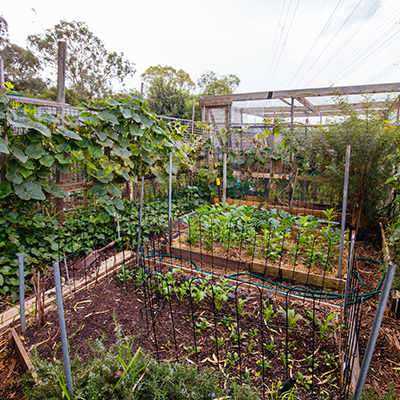 “I bought that house because I wanted to be somewhere tranquil, peaceful.  I didn’t want to live next door to goats!”

Kansas City market farmers Dan Heryer and Brooke Salvaggio of BadSeed Farm recently asked for an exemption to the city codes controlling livestock in residential neighborhoods. Kansas City limits homeowners to two goats, which must be kept 200 feet from any buildings on nearby lots. Dan and Brooke had three goats that rotated through four pens along the fence lines, none of which complied with the 200-foot setback.  Their farm is in the back and part of the front yard of her grandfather’s house (where they also live), in an upscale neighborhood with large lots. 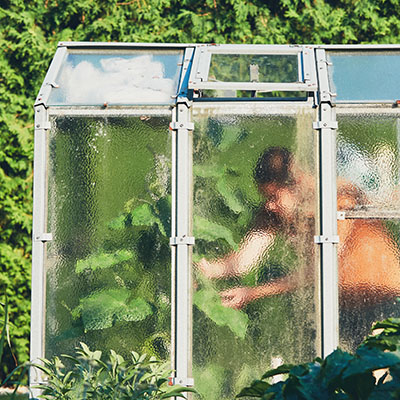 Watch for these obstacles in starting an urban farm

After you find land for your urban farm, there are several issues you need to address. Zoning, agricultural structures, security, water and home/neighborhood based business.

Even though this article is titled "How to Start an Urban Farm", my intent isn't to offer anything remotely resembling a formula for success. Start off with an attitude of openness to the whole question of land.  You may have an idea in your head of how you'd like to own your place, how you'd like it to look, how you'd like it to run, but the city is a complex eco-system.  Your success as a farmer will in no small part result from how well you can interact with and adapt to forces and ideas outside of your own head and heart.

There has been a lot of attention in the media lately to “multi-plot” farms, where a single farmer grows on other
people’s back and front yards, aggregates the produce from the many gardens, and then sells through CSAs or farmers’ markets.

American agriculture is a story of immigrant farmers and laborers. Driven by lack of economic opportunity, religious and political strife, and changes in land ownership and inheritance laws, farmers and farm laborers have moved to the U.S. in search of land and open agricultural markets since the earliest days of U.S. history. The first immigrants were primarily northern European from the British Isles, Germany, Denmark; and Norway, but as time went on immigrants came to farm from other parts of the world, notably from Japan, Mexico, as well as other countries.