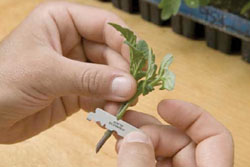 Tomato grafting was late to arrive in the United States, long after it became common practice elsewhere in the world, and it is only now becoming popular among market farmers. But most small growers don’t have the time or facilities to graft their own tomatoes, which involves splicing the top of a desired variety onto a vigorous rootstock variety when the plants are just a few inches tall. So a new niche has opened for greenhouse growers to sell grafted plants to other growers.

“There’s not only a market for it, there’s a great need for it, particularly because so many high tunnels are going up and high tunnel production limits crop rotations,” said Mary Roberts of Windcrest Farm in Monroe, North Carolina, who sells certified-organic grafted tomato transplants locally and by mail order.

Jack Manix of Walker Farm in Dummerston, Vermont, does custom grafting for other local growers as well as for his own farm. “We’ve been very happy with the custom grafting and I guess the customers appreciate it also as we have several who have been coming to us for years,” he said. “Since we’re running heat from mid-January on, we figured we might as well fill up the house to help pay for the heating. Vermont has a great network of farmers and once word gets out that we’re crazy enough to run a greenhouse through the dead of a Vermont winter, other growers come calling for orders. Right now we do about 1,750 for ourselves and 3,000 for others. I also like to do a few hundred on spec as someone always has a power failure and it’s nice to be able to get them back on the growing schedule.”

Greenhouse and hoophouse tomato growers are becoming increasingly convinced of the benefits of grafted tomatoes. Research has shown that grafted tomatoes resist soilborne pathogens such as Verticillium and Fusarium wilt, corky root rot, root-knot nematodes, bacterial wilt, southern blight, and others. Growers whose tomatoes have suffered from those problems are eager to try grafted plants, and many hoophouse and greenhouse growers use grafted plants as a preventative strategy against the potential buildup up diseases when tomatoes are grown in the same soil year after year.

Heirloom tomato growers are particularly interested in grafted plants because many heirlooms have little disease resistance. Some report greatly improved yield, even in the field, from grafted plants.

“The first year we grew grafted Cherokee Purple tomatoes was the year everyone had late blight,” Mary Roberts said. “We did not have that issue at all. The tomatoes we planted in May were still producing in November.”
Interest in grafted tomatoes has even spread to backyard gardeners, thanks to several seed companies including Burpee and Territorial offering mail-order grafted plants.

With so much attention on grafting, you might want to consider whether it could be an opportunity for you to make some early-season cash by custom growing grafted plants. Here are comments from the two growers mentioned above about the demands and problems of commercial grafting.

Jack Manix in Vermont
“We have 20 greenhouses, 10 for flowers and 10 certified organic for starts and in-ground growing but we want to keep heated plastic at a minimum until March. Since we do five shifts of grafting about two weeks apart for ourselves to keep our farm stand flush until the hoophouse and field tomatoes come in, we’re pretty much grafting every few days. I have a great woman, Abby, who’s been working for us for almost 20 years and she has doctor-steady hands and can side-graft about one per minute with around a 98% success rate. We’ve recently started doing some top grafting also which is even faster.

“Generally growers around here want their greenhouses to start producing around mid-May at the earliest to supply opening farm stands, markets and CSAs. Trying to get ripe toms much earlier than that is difficult because of the light situation in January and February. Since most of the growers are picking up their orders in late February or early March, it cleans out the greenhouse just in time for our own field crop starts and the money that comes in is nice to help with growing labor costs.

“There is, of course, some stress involved. Being responsible for an important crop for local farmers in the dead of winter is a heavy obligation. We have a very good alarm system and backup heaters just in case. One winter the wind chill got down to –20 and –30 for three nights. That’s when I learned that propane can turn to jelly at low temps. I had to wake up every hour and check that the emergency heater was not getting too hot or too cold. Next summer I had a larger gas supply line put in so I could get some sleep.

“We sure don’t want our customers to get plants with problems so we’re religious zealots for Rootshield soakings, at least three times during the growth stages. We also use banker plants and trap plants with beneficial insect releases to keep the bad guys at bay. This all has to figure into the price. Right now we are charging $4 to $5 depending on whether or not the customer is supplying the rootstock and scion seed. Prices seem to be going through the roof lately with Geronimo tomato seed selling for around $129 for 250 seeds. That’s over 50 cents each and the Maxifort rootstock is not much better. Luckily I panic bought and have around 10,000 Buffalo seeds in the freezer from 5 or 6 years ago. Turns out it was a lot better investment than the EToys stock that tanked for me a number of years ago.

“We also graft about another 600 for a fall crop that carries us until our farm stand closes on Thanksgiving. The fall toms only produce about half the weight but they’re large and pretty. The spring-summer plants can produce 15 to 20 lbs. per plant and with organic tomatoes selling for $3.49 to $4.49 per pound through the season, that can pay for a lot of grafting.”

Mary Roberts in North Carolina
“We are grafting tomatoes but we are limiting the plants we have available this season because grafting is very labor intensive at a time of the year that is, for us, the most labor intensive time anyway. In addition, we have had seasons (spring/fall) when we achieved a 98% success rate and some seasons we have had a 2% success rate using the same methods. We will be offering grafted plants from an inventory rather than custom growing as we have in the past until we can be certain we can supply growers consistently. For growers planning on a large quantity of grafted plants that they produce themselves or contract from a commercial greenhouse, I recommend that you have a back-up plan.

“One of the challenges of grafting tomatoes is matching the growth rate and stem diameter of the scion (top) with the rootstock for best healing success. Note that in some of the research they are using growth chambers with daylight length controls. In the real-world farm environment, you will need to pay close attention to make sure you are getting comparable growth rates between the scion and rootstock. Because we are USDA Certified Organic, we do not use PGRs (plant growth regulators) in our greenhouse production. Matching stem diameters is easier with older plants but the amount of time growing out two tomato plants for one grafted plant costs more (then add the extra labor and real estate for a healing chamber). Heirloom tomato plants grow differently than hybrid rootstocks (we have even seen different shaped tomato stems!). If you want to try your hand at grafting, start with the tomato varieties that have been used successfully in research trials. We originally started grafting 128 cell sized plants to make it cost effective for our customers however the stem size in a 128-cell can be tricky and the failure rate higher. We are now doing 50s and 72s.
“Regarding the SARE article (see Resources at end) and other research papers on tomato grafting, an area of difference has been with regards to the humidity level in the healing chamber. We found that when we pushed the humidity up to 80-90%, water droplets forming on the leaves dislodged the scion from the rootstock and prevented healing. However, you can imagine what happens when there is inadequate humidity. The scions wilt and fail to heal. Again, larger plants will not have as much of an issue, but again they can be rather expensive to produce.

“We are fully committed to ramping this up commercially, and if folks want to call us to get on a waiting list for our grafted plants, I’m willing to do it. But I’m not going to guarantee we’ll have 500 grafted plants on a specific date — that’s not fair to anyone.”

Mary can be reached at [email protected].

Resources
USDA’s Sustainable Agriculture Research and Education program has released a new fact sheet about the benefits and practice of grafting. It includes an extensive list of resources. Tomato Grafting for Disease Resistance and Increased Productivity, is available free, online only, from http://low.sare.org/Newsroom/Press-Releases/Grafting-Tomatoes-Brings-Better-Yields-Naturally

Johnny’s Selected Seeds has a 20-minute video by the University of Vermont Extension about grafting, featuring a Vermont grower who grafts for his own greenhouses and for other tomato growers. You can watch it at http://www.johnnyseeds.com/t-video_tomato_grafting.aspx