This article originally appeared in the March 2021 issue of Growing for Market Magazine.

Back in March of 2020, Eric, of Bay Branch Farm in Cleveland, OH, posted a bunch of photos of the automatic roll-up curtains on their hoop house with this caption:

Maybe not thought of as a traditional tool, our high tunnel automation is one of the best tools we have on the farm. The outdoor temperature in this video was around 65F but the inside stayed right around 75F on a very sunny day. This becomes even more important later in the spring once the tomatoes are in there. We believe it makes a world of difference with the Solanaceae in the spring as 45°F sunny spring day temperatures in the tunnel can get to well over 90, so regulating that temperature is critical. I did DIY the controller but in the future I would buy an off the shelf controller from Advancing Alternatives. Also noted, this tunnel uses natural convection without any powered ventilation. During the hottest times of the summer the tunnel will say within 5 degrees of ambient temperature. Lastly I recall a podcast with Josh Volk in which he stated “automate everything”. Great advice which we have taken to heart.

Funny, I don’t remember saying that, but I might have. Talking to Eric about his experience over the past four years with the automated curtains it seems that he’s come to the same conclusion as I have with my automated water in my propagation house – it’s more than just convenient to not have to remember to do the task multiple times a day, the task also gets done more consistently by well-implemented automation whose only job is keeping track of when and how much to vent (or in the case of the irrigation, making sure everything gets timely water). Having the automation doesn’t mean you don’t have to check up on how well it’s working – like when the power accidentally gets disconnected and it’s not working at all – but it does free up a lot of time and mental space during the season. 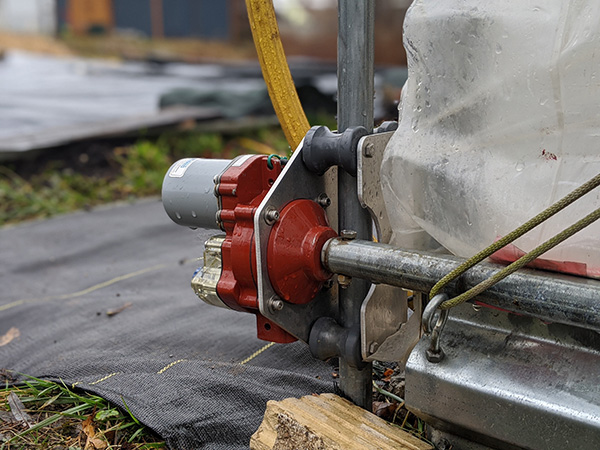 The curtains are just part of the automated passive ventilation system in Bay Branch’s tunnel. The curtains are paired with four big louvered gable vents in the end walls. Their hoop house is 30 x 72 with tall walls. The hoop house was set up specifically for summer solanum production, although they do grow some greens and roots for themselves in the winter.

Eric specifically wanted to avoid using ventilation fans for numerous reasons including the noise, expense, and power consumption. Instead, he focused on optimizing natural convection by placing two 4’ x 4’ vents as high as possible on each end wall to vent hot air from the top of the house, and roll up curtains on the sides to let in cooler air when needed. The louvers on the end walls are operated with linear actuators on a separate controller from the side curtains. 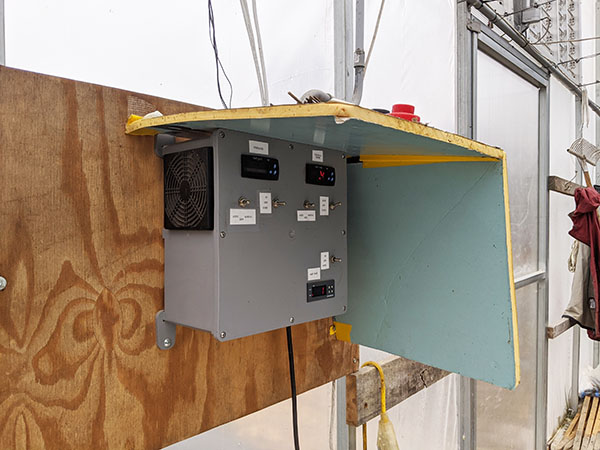 The control box for the vents, automatic roll up side curtains, and HAF fans. The insulation board keeps the control box from heating up in the sun and makes it easier to read the displays.

By setting the opening temperature 5-10F lower than the temperature for the side curtains the curtains will only open if the louvers can’t vent enough hot air to keep the temperature down. In cooler conditions this keeps cold air from rushing in right next to the plants when it’s not necessary. 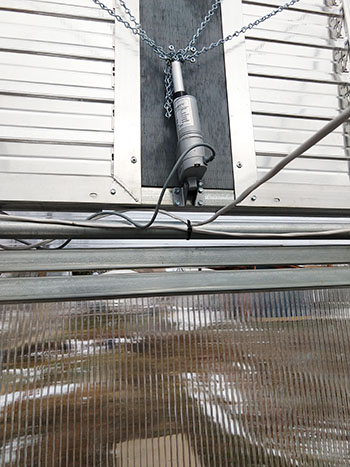 With the help of four chains, one linear actuator is used to open two louvered gable vents.

When I talked to Eric about his system, he also let me know that he’s using Wireless Tag Sensors to keep track of the temperatures in his hoop house. Having the sensors logging the temperatures he can see that the automated system has worked really well at maintaining a consistent temperature, without getting too hot, or too cold. I’m also intrigued by the Tag Sensors which work with a wi-fi system to send text alerts if something goes wrong and the temperatures get too hot or too cold. 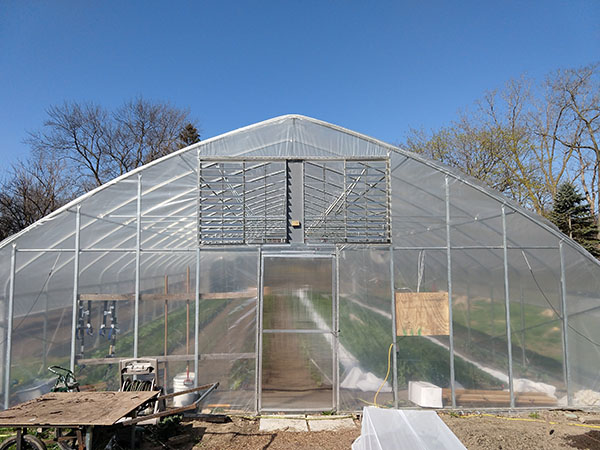 The end wall showing the louvered vents and side curtains both open on a warm, sunny day.

If you have a temperature monitoring tool, or any other farm tools that you find really helpful on the farm please tag photos of them on Instagram and Facebook with #toolsforgrowingformarket. I love scrolling through that hashtag and seeing all of the tools farmers are sharing and I hope you’re finding some good ideas from other farmers there, too! 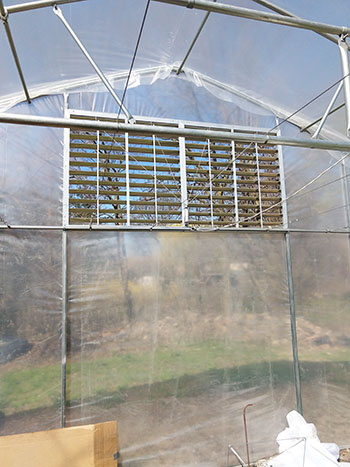 Josh Volk farms in Portland, Oregon, and does consulting and education under the name Slow Hand Farm. He is the author of the book Compact Farms: 15 Proven Plans for Market Farms on 5 Acres or Less, available from Growing for Market. He can be found at SlowHandFarm.com.