As reported in the October issue of Growing for Market, seed garlic is in short supply this year. Part of the shortage is blamed on bad weather in the Northwest, but the garlic bloat nematode has also contributed to the problem. Many growers in the Northeast and Canada have lost their crops to the pest. 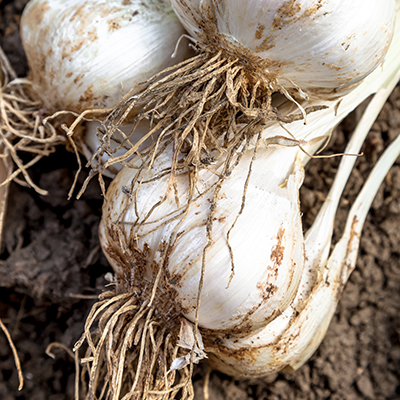 "This is pretty serious financially," said Ed Fraser of Fraser's Garlic Farm in Churchville, NY. "It's put a couple of farms totally out of business." The bloat nematode is a microscopic organism that can destroy an entire crop of garlic in one season. It is believed to have arrived from Canada in garlic imported for food, but planted as seed garlic, Fraser said. Because there is no certification program for seed garlic, the problem spread quickly through distributors and is now widespread. Cornell Extension reports that bloat nematode has been confirmed in 14 counties in New York.
Symptoms of bloat nematode in garlic plants include yellowing, stunting, twisting and looping of leaves. Cloves may show light brown discoloration that later becomes soft, mealy, or spongy. Bulbs infested with nematodes are also susceptible to Fusarium and other fungi. Bloat nematodes can overwinter in soil or crop debris.
According to the Garlic Seed Foundation, the nematode can be spread around your farm on equipment or boots and it has more than 100 host plants, including many weeds. "If you're been growing your same garlic for many years and have not introduced any new stock, it is doubtful you would have this pest. However, if you purchased/brought in new planting material on a regular basis, you may have this pest," GSF warns.
Ed Fraser suggests that if you have just purchased seed garlic, you should call the supplier and find out if the garlic was tested for bloat nematode or at least where the seed garlic was grown. If it came from Ontario or New York, you should get it tested before planting it. Contact your state Extension Service to find out if they will test for it.
Cornell Cooperative Extension has just published a new fact sheet, Managing Bloat Nematode in Garlic that explains what to look for and how to respond if you do find out you have it on your farm.