Home Archive How to treat powdery mildew on vegetables and flowers

How to treat powdery mildew on vegetables and flowers

As warm, dry weather settles in this month, be alert for the development of powdery mildew on crops. Powdery mildew is a common summer problem on many types of vegetables and cut flowers. But most powdery mildew can be avoided or cured with inexpensive, homemade remedies that have been proven to work as well as or better than commercial fungicides. 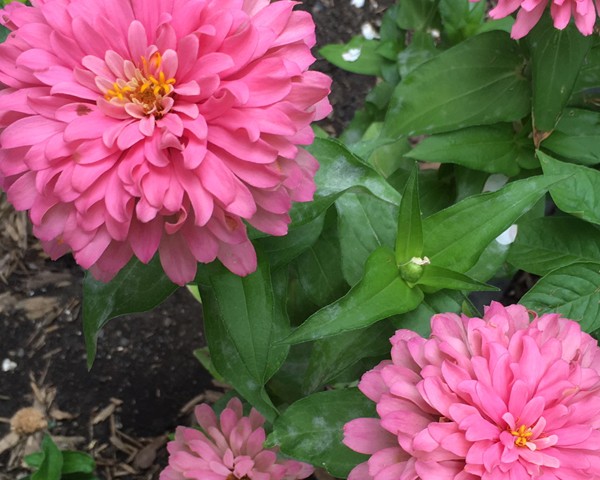 Powdery mildew, common on zinnias and other crops in mid-summer, starts with just a few spots on the lower leaves, as shown in this photo. Without treatment, it will spread to shoots and buds and eventually kill the plant.

Several species of fungus cause powdery mildew, each affecting different groups of plants. The main species is Erysiphe cichoracearum, which affects composites, including:

Identification
The first thing to know about powdery mildew is that it is quite different from downy mildew, despite some similarities in appearance. Both produce light-colored masses of spores on foliage. Downy mildew develops spores only on the undersides of leaves, whereas powdery mildew will appear on both sides of leaves as well as shoots, buds and sometimes flowers. Moreover, downy mildew is a disease that appears in cool, wet conditions and is generally stopped by warm, dry, windy weather. Powdery mildew thrives when foliage is dry and the weather is warm; wind spreads the spores to other plants. In fact, powdery mildew spores can’t germinate or grow when foliage is wet, so overhead watering is sometimes recommended as a preventative on highly susceptible crops.

Powdery mildew spores overwinter on perennial crops such as grapes, raspberries, strawberries and fruit trees, or in plant debris left from last year. When conditions are just right, this year’s growth can be affected and the disease spreads quickly. The optimum situation for the development of the disease is cool, humid nights followed by hot, dry days.

If left unchecked, powdery mildew will cause leaves to turn yellow, die and fall off, leaving fruits and vegetables exposed to sunburn and making cut flowers unmarketable. Preventative action in susceptible crops and regular scouting can prevent a catastrophic outbreak of this disease. Following are some of the remedies and products available for preventing powdery mildew Some of these recipes may be acceptable for organic production, but you should check with your certifying agency if in doubt. Commercial products should have the approval of OMRI, which can be verified at www.omri.org. Much of the advice about how to mix these sprays is from the Bio-Integral Resource Center, whose contact information is at the end of the article. 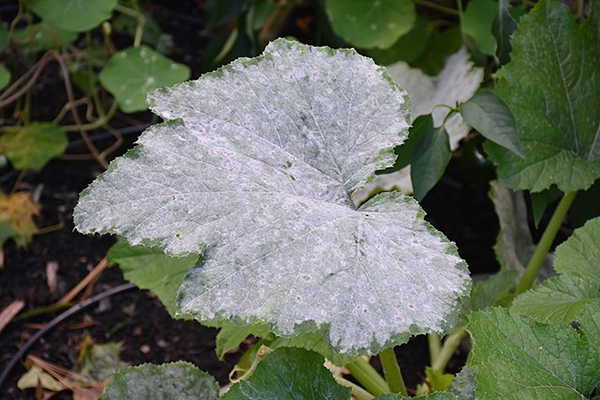 Powdery mildew on a squash leaf. Photo by Dmitry Brant, use under creative commons.

Milk
The newest organic control for powdery mildew is milk. In 1999, Brazilian scientist Wagner Bettiol reported excellent control of the fungus on greenhouse-grown zucchini using fresh cow’s milk diluted with water to a 10% solution. An Australian researcher, Peter Crisp, experimented with milk on roses and wine grapes - which get powdery mildew from different organisms. Crisp found that in most cases the 10% milk solution worked as well as the leading synthetic fungicide and as well as sulfur.

According to an article in Science News, the results have been proven in the field by grape growers. But there is some concern than using any product, even milk, repeatedly may allow the fungal organisms to develop resistance. So the current recommendation is to spray for powdery mildew every week, but alternate between remedies. And there are plenty of other recipes from which to choose.

Baking soda
Sodium bicarbonate - the same stuff you use for making biscuits or deodorizing the refrigerator - is highly effective against powdery mildew. Its effectiveness is not understood precisely, but it is thought to be a case of induced resistance - that is, the baking soda causes the plant to produce some compound to defend itself against pathogens.

Baking soda is particularly effective when paired with a horticultural oil. To mix your own solution, for each gallon of water in your sprayer, add 1 Tablespoon baking soda and 2.5 Tablespoons of horticultural oil. This makes a 0.5% concentration of bicarbonate, the maximum recommended for control of powdery mildew on roses; other species may tolerate greater concentrations, but you should test for phytotoxicity before spraying large areas.

Baking soda has a few drawbacks: First, it must be sprayed every week to protect new growth on the plant. It also can build up in soil when used in drought-stressed areas where only drip irrigation is used. Increased bicarbonate in soil can lead to removal of calcium and magnesium, and prevent the absorption of iron and lead to iron chlorosis. (These risks appear to be small in most farm situations.)

Garlic
Yet another kitchen remedy is garlic extracts, which can be made by blending two bulbs (not cloves!) of fresh garlic in a quart of water with a few drops of liquid soap. The liquid should be strained through cheesecloth to remove solids and then refrigerated. That concentrate should be diluted 1:10 with water before spraying. That provides a concentration of 25-50 parts per million of the active compound allicin, which will help prevent germination of powdery mildew spores. Once the spores are active, though, a concentration of 300 to 500 ppm is needed to cure powdery mildew.

Compost tea
The antifungal properties of compost tea are by now well known. Many organic growers, especially in the rainy Northwest part of the country, have had great results and are advocates for the benefits of compost tea. Several companies sell equipment for making compost tea, and some growers just mix one part of finished compost with six parts of water and let it soak for a week, then strain and dilute with water until it’s the color of tea.

Oils and anti-transpirants
Oils alone can be used to control powdery mildew. Vegetable seed oils such as canola oil can be used, at a rate of 2.5 to 3 Tablespoons per gallon of water, with the addition of a quarter-teaspoon of liquid soap to emulsify the oil. Most commercial horticultural oils already have an emulsifier added, so additional soap is not needed. Soap itself has been found to control powdery mildew, but it can cause phytotoxicity.

Neem oil is labeled for control of powdery mildew, rust, blackspot, botrytis, downy mildew and other diseases. Spraying with 2.5 Tablespoons per gallon of water every 7 to 14 days is recommended.

Mint oil (Fungastop) and rosemary oil (Sporan) are now being marketed as fungicides. Cinnamaldehyde (Cinnamite) also has been effective at controlling powdery mildew.

Antitranspirants are sprays that are used to prevent water loss from plant foliage. They have been found to also protect against several foliar diseases, including downy mildew, powdery mildew, and blackspot. One study showed that the antitranspirants Wilt Pruf and Vapor Guard, which are widely available at garden centers, protected roses from powdery mildew for 30 days. According to BIRC, antitranspirants are nonspecific against pathogens, so the fungus is not likely to develop resistance. However, they do reduce plant photosynthesis and should be used only during sunny weather and they need to be reapplied to protect new growth. 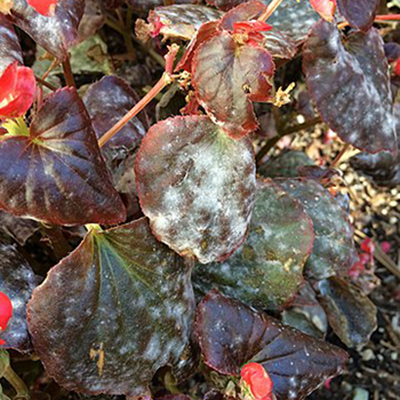 Powdery mildew on begonia leaves. Photo by Scot Nelson, use under creative commons.

Copper and sulfur
A traditional treatment for plant diseases involves spraying sulfur and copper on highly susceptible plants. Several products are available for use by organic growers, but they are considered restricted, which means they can only be used if other management practices have failed. Both copper and sulfur can irritate skin and mucous membranes, so breathing protection should be worn.

Bacteria
Bacillus subtilis and Bacillus pumilis are two bacteria that have been found effective against powdery mildew and other diseases. Several commercial products containing these bacteria are now available: Serenade for home gardeners and Rhapsody for commercial growers. Sonata is specifically for control of powdery mildew in roses.

Lynn Byczynski is the founder of Growing for Market Magazine and the author of The Flower Farmer: An Organic Grower's Guide to Raising and Selling Cut Flowers.

Please subscribe! Growing for Market is published 10 times a year and features practical, how-to articles about growing and selling produce and flowers. With a Full Access subscription, you will also have access to thousands of articles in our archive. Click here to learn about print and online subscriptions.

Research conducted on Long Island by Meg McGrath of Cornell has shown that resistant varieties provided better control of powdery mildew than that obtained with fungicides applied to standard susceptible varieties.

Last year at Sunny Meadows Flower Farm we expanded our production from four acres to ten. Being in the city of Columbus, Ohio, and already using all of our own land, we had to consider other properties to expand production. We currently rent the lot adjacent to ours, but have no contract and are afraid of being kicked off some day, so we know we need something with a little more security as we continue to think about expanding perennials and greenhouses. 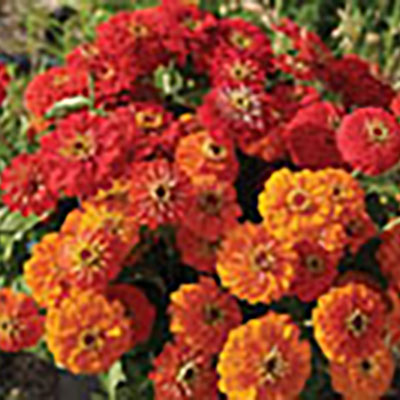 Make zinnias one of your most profitable crops

When times are tough, the tough just plant more zinnias. They are fast, productive and relatively inexpensive.  And there are many new varieties that make this crop more than just your grandmother’s garden flower.