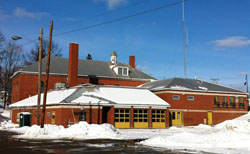 Not everyone would look at a slightly decrepit, Civil-War-era county jail and see the perfect home for a multi-spoke local food hub. But a group of people in Skowhegan, Maine (pop. 8,589), have done just that, with years of work finally coming together this year in a functional local foods center.

As a continuation of the article about food hubs from the June GFM, I will profile the most diverse example of a food hub that I’m aware of. The Somerset Grist Mill in Skowhegan, Maine, is the center of a number of different local ag-centered businesses. It incorporates almost all of the usual elements of a food hub, and some unusual ones too.

At its heart is a grist mill for local grains based in the former county jail.  The mill building also serves as the aggregation, box packing, and pickup location for a multi-farm CSA, called the Pickup. The Skowhegan Farmers market meets in the parking lot. The former jail kitchen serves meals made from local produce during the farmers market, and will make preserved foods out of area farmers’ seconds. The kitchen also serves as home base for the Maine Grain Alliance’s education and outreach efforts. Once the mill is running later this year, retail and wholesale amounts of flour made from local grains will be available for sale.

But before any of this could happen, there was the vision that turned the jail into a food hub. 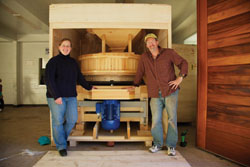 century. When the county decided to build a more modern facility outside of town, the question turned to what to do with the old brick building. A group of local people saw the potential of the downtown location and how the vertical interior space could accommodate grain cleaning equipment and bins. And, because of the full-service nature of the building’s former purpose, there was a commercial kitchen. Building a new commercial kitchen from scratch would have cost as much as the asking price of the building.

The idea took shape in 2005 when Amber Lambke and friends were working with Skowhegan Main Street (part of the National Main Street Network) on how to revitalize the downtown. Like a lot of other small towns, Skowhegan had more than a few vacant storefronts. They were also trying to do something about the fact that there was very little bread baking going on in central Maine. The extinction of local mills is not an unusual situation, even in prime grain-growing regions, as most grain handling and processing facilities have been consolidated and centralized.

The state of Maine was considered the breadbasket of Boston way back before warmer, flatter land opened up to the West. There used to be as many as 10,000 small grist mills in Maine, and now the closest one was three hours away. There is still a lot of grain production in Maine in rotation with potatoes, but most of it is lower protein grain destined for animal feed.

One of the unique barriers to bread baking which Lambke and friends recognized is that, unlike vegetables, the raw materials (i.e. wheat or other grains) are not very marketable in their raw state. Most people want to buy flour or baked goods, not wheat berries. Nobody was going to start growing grains or baking local bread if there was nowhere to mill the grain. The fact of the matter is that if you want to bake local bread out of local grains, you have to have a local mill. 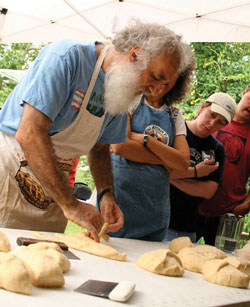 Lambke and friends tried to figure out how to break this logjam. Albie Barden, wood-fired oven designer and builder with the Maine Wood Heat Company, http://www.mainewoodheat.com/, thought there should be a conference to get farmers, oven builders and bakers together to figure out how to bring back local bread grain production. The consensus was that they would all have to work together for more baking to happen with local grains. Out of this was born the Kneading Conference in 2007 http://kneadingconference.com/.  Instead of focusing solely on baking, The Kneading Conference emphasizes the connection between grain growing and the finished product. There are workshops for farmers, oven builders, and bakers in order to make connections between the groups and promote local bread baking in central Maine and beyond. The thought was that the conference would promote a local bread culture, and help recruit a miller for the area.

The conference was a great success and is held every year in late July, and has even spun off a Kneading Conference West in Washington State, http://kneadingconferencewest.com/. But the attempt at the conference to recruit a miller for Skowhegan was not fruitful.

The Maine Grain Alliance
The Maine Grain Alliance (MGA) is the other offshoot of the discussions that led to the Kneading Conference. MGA is a nonprofit whose mission is to teach and provide a forum for knowledge exchange on all aspects of local grain including fermenting, growing, milling, oven building, baking, and policy. Their stated mission is to “provide opportunities to learn and share how best to grow grains and bake breads using local, nutritious, and sustainably-grown ingredients using a combination of traditional and innovative techniques.”

After the unsuccessful attempt to recruit a miller for Skowhegan, Lambke and friends began thinking that if they wanted a mill for locally grown grains, they might have to do it themselves. And they started thinking that the vacated jail might be the place for it.

After exploring a variety of funding sources and convincing the town to sell it to them, Lambke and business partner Michael Scholz bought the jail in 2010. They rechristened it the Somerset Grist Mill and began the long process of turning it into a mill.

“I had never written a grant before we bought the jail. I didn’t think I could do it,” said Lambke. “But grant writers were too expensive, so I did.”

The intervening two years since they bought the jail have been busy with fundraising, taking the razor wire off, remodeling the jail and installing all the equipment necessary to retrofit it as a mill—including a three ton stone mill from Austria. They are currently doing final equipment installation, and they have 150 acres of Maine grain under contract in order to start selling Maine grain products this fall.

The building has been refurbished and the commercial kitchen is in use. The kitchen is roughly half owned by MGA, which uses it as a base for its mobile wood-fired-oven baking education programs which visit schools and fairs. MGA is also working on launching a space for bakers from all over to have a test kitchen for local grain products. Working with local grain products is different from using industrially produced flour because the industrial product is milled to remove any variation that may occur due to variety, weather, and growing location.

Lambke says they are more than a million dollars into their projected cost of $1.5 million to get the mill running — not bad for someone who had never written a grant before.

For those who may want to make something similar happen in their communities but don’t have the fundraising experience, Lambke says: “Keep in mind that foundations have to give away 5 percent of their money each year. There’s a whole lot of money to be given away,” to non-profit, good causes. There are foundations that are dedicated to land conservation, nutrition, food access in low-income areas, and other interests that are a good match for farming-related projects.

One of the best places Lambke found for fundraising was the Maine Philanthropy Center, and the National Philanthropy Resource Center.  Many other states also have philanthropy centers, where you can find out what kinds of grants and projects are available for support in your area. Slow Money and Kickstarter and the Somerset Economic Development Corporation also helped find the money to make the project happen.

The Farmers Market
As the Skowhegan Farmers Market has steadily grown over the years, it has outgrown a number of locations around town. Now the year-round market has a permanent home in the spacious parking lot of the Mill. The former jail provides a centrally-located meeting spot for the market, with ample parking on all sides and a short walk from the other businesses downtown. There are plans for a market pavilion.

Just this past year, the farmers market successfully launched a Wednesday market, thinking that people who work in town may not want to come back into town on the weekend for the market. This has proved to be a great strategy as the Wednesday evening market has been well attended. It can’t hurt that the MGA’s mobile wood fired oven is fired up each Wednesday, selling pizza topped with whatever is fresh every week at the market.

Multi-farm CSA
While the Somerset Grist Mill promotes local grain products, the Pickup multi-farm CSA helps promote local produce (http://thepickupcsa.com/). Operating out of the former garage bay of the jail, the Pickup has updated the look of the clean brick interior with a fresh coat of paint on the window frames and doors.  On days when shareholders come to get their bags of produce, the garage doors are rolled up to create an open, inviting space where people can find their shares. A small retail area with refrigerator and freezer space has been added, offering additional farm products so people can see what else is on offer locally, in case they want to add anything to their week’s produce.

In addition to the family-sized CSA share, the Pickup offers an institutional share in half or full pallet sizes for larger customers who want to source local foods. And since they’re coordinating with farmers anyway, they offer wholesale ordering, with a weekly availability list from the 20 or so farmers that participate in the Pickup CSA.

The commercial kitchen is making prepared food items, such as soup, slaw, salsa and pesto which are included in shares or available for purchase separately. On farmers market mornings, the café offers hot “grab and go” breakfast items like muffins and breakfast sandwiches and coffee. There is outdoor seating where people  can enjoy the morning and the market scene. And there is a plan to start doing Friday night farm dinners, offering dining with fresh, local fare to the public, to start some time this year.

The success of the Skowhegan food hub is living proof that local foods are growing strong, and that you don’t need a big urban area to make it happen.

Andrew Mefferd is the owner of One Drop Farm near Skowhegan, Maine. He can be contacted at [email protected]