The Food Project in Boston is one of the earliest and most successful urban farming ventures in the U.S. (One of The Food Project's urban gardens is featured on the cover on the 2011 Johnny's catalog.) The organization's mission is "to create a thoughtful and productive community of youth and adults from diverse backgrounds who work together to build a sustainable food system." To that end, The Food Project employs teenagers in multiple gardens in and around Boston to grow food for a CSA, farmers markets, and food pantries. It also provides assistance to city residents who want to grow their own food.

One of the biggest issues for urban farmers and gardeners is the presence of lead in urban soils. Researchers at Wellesley College tested 141 backyard gardens in two Boston neighborhoods and found that 81% of them had lead levels considered dangerous by the EPA. In collaboration with Wellesley, The Food Project experimented with different ways to remediate the lead contamination. The organization has found that amending with compost and building raised beds are the most cost-effective and efficient remediation techniques.

The Food Project has many free resources available on its website, including an Urban Agriculture Manual that details how the project creates healthy soil, intersects with the community, works with young people, and plans urban food lots.

Growing Power is another long-established urban farming project, and it gained well-deserved recognition in 2008 when its founder, Will Allen, was named a John D. and Katherine T. McArthur Foundation fellow and awarded a "genius grant" for his work. In addition to the programs it operates in Milwaukee and Chicago, Growing Power offers national outreach through its Commercial Urban Agriculture Training.

Issues that face urban farmers include zoning codes, business licenses, nuisance and noise laws, water access, and neighbors. Writing in Growing for Market, Katherine Kelly, director of the Kansas City Center for Urban Agriculture, advised growers on what to expect when creating a new farm from an urban lot.

• Subscribe to Growing for Market for the latest news and ideas.

For a Longer Harvest Window, Try Succession Planting
Whether growing vegetables for market or your own table, succession planting is an important part of planning. You want to avoid a feast-or-famine situation where the entire crop comes in at once and then is done. It's much better to have a steady supply ready for harvest over the longest possible period. Plus, you reduce the risk of crop failure by having multiple successions in the queue.
Read More

What Can You Plant Now?
February is the month when the days get long enough for plants to start or resume growth. It may still be bitter cold, and there may be snow on the ground, but the market farmer starts feeling the irresistible pull of a new growing season. If you have a greenhouse or hoophouse, you know it's time to get your hands dirty.
Read More

Growing Vegetable Transplants for Sale
February is the month when the days get long enough for plants to start or resume growth. It may still be bitter cold, and there may be snow on the ground, but the market farmer starts feeling the irresistible pull of a new growing season. If you have a greenhouse or hoophouse, you know it's time to get your hands dirty.
Read More

Your Tool Shed
The place where you store tools and supplies is probably the least glamorous part of your farm, but getting it organized can save time and money during the busy season.

Going for a tool and finding it missing is both frustrating and time wasting. If you have more than one person working on your farm, you need a clearly designated place for tools and a rule that every tool gets put away when its work is done.
Read More

Display Your Products with Purpose
There’s both art and science to displaying produce at a market. A beautiful display catches the eye of customers and brings them to your stand. Then the science of selling takes over and makes it easy for customers to purchase your products. Here are some of the rules of farmers market display that will help you sell more:

Succession Planting in the Greenhouse 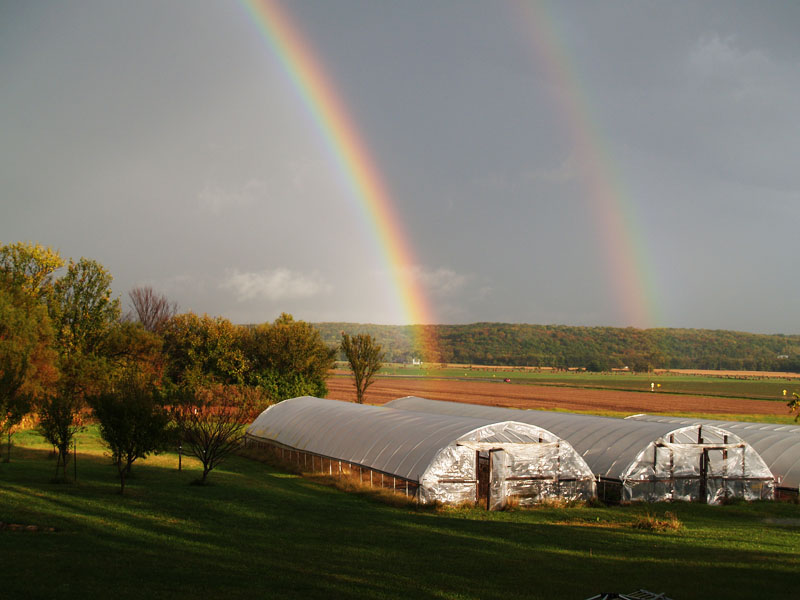 Succession planting is one of the more challenging aspects of commercial vegetable production because there are no prescriptions or shortcuts. You have to work out your successions to fit your own marketing schedule, climate, and crops. And then you have to refine your plans every year, as you learn how specific varieties perform for you. Good record keeping and analysis are essential to successful succession planting. Here are some general rules to keep in mind for scheduling your greenhouse transplants.
Read More

Plan for Next Year's Holidays
In this season of gift-giving, you'll find the stores are stocked with food baskets, herbal gifts and other products from the garden. If you're like most gardeners, you'll think, "I could have made that!" And you know your friends and family would much rather have homegrown, homemade gifts than something mass-produced in a factory far away.
Read More

What to Plant Where

Planning your field or garden layout is one of the most challenging aspects of vegetable production because multiple goals must be accommodated in the plan. Rotations, planting dates, time to maturity, duration of harvest, and microclimates are have to be considered. You also need to know recommended crop spacing so you can calculate how many plants will fit. It's a complicated exercise, especially considering that it should change every year, so you need to design your next planting plan with an eye to the future.

Heat tolerance in plants
"Is it hot enough for you?"
You've probably heard that question more than a few times during the dog days of summer. If you're like most growers, your main concern is not for yourself (you can get out of the heat!) but for your crops. Most vegetables, even those we think of as heat-loving vegetables, don't do well when temperatures soar into the 90s and stay there. In this article, we'll focus on production, harvest and postharvest solutions to summer's heat.

How to Choose Fall Cucurbits
If you've grown or thought about growing pumpkins, winter squashes, and gourds, you have likely noticed the large number of varieties that are available. Johnny's offers a diverse selection of cucurbits, some strictly ornamental, some strictly edible, and many that serve both purposes -- in all, more than 60 varieties. With so many to select from, you may be wondering how best to make your choice.
Read More

The greenhouse advantage
Across most of North America, December is down time for market farmers. Days will keep getting shorter until the winter solstice on Dec. 21 and, in most places, it’s too cold for much of anything to grow. Greenhouse growers, though, are gearing up this month. It’s time to start tomato, lettuce, and pepper seeds for transplanting into a heated greenhouse, followed shortly after by transplant production for the unheated greenhouse. If working in the greenhouse sounds like therapy for the mid-winter blues — not to mention a way to make some cash earlier next year — then read on to learn more about how greenhouse growing might fit into your business plan.
Read More