You are here: Home » Market Farming Basics » Caterpillar tunnel: An inexpensive variation on the hoophouse theme

Caterpillar tunnel: An inexpensive variation on the hoophouse theme

Start a subscription to Growing for Market Full Access and read thousands of useful, how-to articles about growing and selling food and flowers. Click here to learn about print and online subscriptions.

Among the many season extension structures in use on vegetable farms today, one of the least expensive is the caterpillar tunnel. Caterpillars — so named because of their segmented appearance — are constructed of pvc pipe, rebar, and rope. They can be up to 300 feet long, and don’t require flat ground. Most are 5 to 6 feet tall at the center of the hoop, so the grower can walk into them from any point along their width (although it’s not as comfortable as working in a high tunnel). 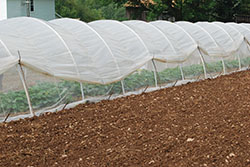 Caterpillars are easy to build and move. They are inexpensive compared to permanent hoophouses and most of the materials can be found locally. They provide protection but, at the same time, excellent air flow.

This article will focus on growing summer crops, including cucumbers, tomatoes, eggplants, and flowers in a caterpillar tunnel.

Building a caterpillar
The hoops for a caterpillar tunnel can be galvanized steel, electrical conduit or pvc. They can be pushed directly into the soil, or placed over rebar ground stakes, with about a foot in the ground in either case. Hoops should be spaced 6-10 feet apart, depending on wind exposure. A rope is then tied from hoop to hoop to form a purlin that runs the length of the tunnel. The rope should be tied off to stakes at both ends of the tunnel. The covering is then pulled over the tunnel and held to the ground with pegs, sand bags, or rocks. Stakes are pounded into the ground between hoops on both sides of the tunnel. Ropes are tied across the top of the tunnel to the stakes to hold the covering in place.

Anne and Eric Nordell of Beech Grove Farm in Trout Run, Pennsylvania, use caterpillars on their farm. Here is how they build them:

They set 30-inch pieces of 5/8-inch rebar 6 feet apart and 18 inches deep (12 inches of rebar sticking out of the ground) in two rows 10.5 feet apart. For the hoops, they use 20-foot lengths of Schedule 40 1-inch pvc pipe. They slide the pvc pipe over the rebar stakes, forming flexible hoops. For the ridge purlin, they use clothesline and loop it around the top of each hoop and tie it off to 36-inch rebar posts that are set about 8 feet past each end of the tunnel. They attach a separate rope from the end hoop to the stake to add stability.

Cucumbers and tomatoes
The Nordells have a short season at their farm in the mountaints. They have found the caterpillar tunnel to be a cost-effective way to get growing earlier and later, and to protect crops from insects and disease. They use a caterpillar for lettuce, spinach, salad mix, cucumbers, tomatoes, basil, chard and kale.

For the past three years, they have participated in a trial of organic control of cucurbit pests sponsored by the Pennsylvania Association for Sustainable Agriculture (PASA). The Nordells focused on early cucumber production using Enviromesh anti-insect screen and 6-mil greenhouse poly on a caterpillar, and compared it to their standard practice of growing cucumbers under floating row cover outside.

For pollination, they removed the floating row cover when the plants flowered in the field; inside the caterpillar, they placed bumblebee hives.

Yields were 78 percent higher in the caterpillar than the field. The field cucumbers had a 28 percent cull rate, all because of damage by cucumber beetles, compared to 20 percent culls in the caterpillar, all caused by misshapen fruit. Some cucumber beetles did manage to sneak into the caterpillar, but in general it did a good job of excluding them. The caterpillar also accelerated the first harvest of cucumbers by nine days compared to those under floating row cover.
The caterpillar also saved the Nordell’s tomato crop last year. In the field, the first tomato harvest is normally the third week of August. But late blight, which was rampant all over the East in 2009, killed their field tomatoes in mid-July, before they started producing. But the tomatoes in caterpillars started bearing in early July and kept on going until late August, when they finally succumbed to late blight. In other words, the caterpillar provided six weeks of earliness and six weeks of late blight protection.

The insect screening, while obviously essential for pest control, also seemed to improve the stability of the caterpillar tunnel, Eric said. Whereas spunbonded row cover such as Agribon is susceptible to being torn off by wind, the insect screening lets air move through the tunnel, resulting in less damage to the structure and better air circulation for the crops.

Enviromesh, also known as Proteknet, insect screen is available from Purple Mountain Organics in the U.S. and from Dubois Agrinovation in Canada (they will ship to the U.S. See www.duboisag.com). Other brands of greenhouse insect screening  are available from G&M Agricultural Supply.

Flowers
Growing cut flowers in caterpillars has resulted in longer stems and higher quality blooms for Jan and Ted Blomgren of Windflower Farm in Easton, NY. They started using the tunnels with row cover to exclude leafhoopers, which carry aster yellows, a disease that damages many flowers in the Aster family. Not only were they able to grow China asters without leafhopper damage, they also got 3-foot stems. Since then, they have grown many kinds of flowers in caterpillars, including bells of Ireland, godetia, lisianthus, snapdragons, and stock. Now they cover the flower caterpillars with 3-4 mil greenhouse film, not row cover, and grow asters under row cover in low tunnels. The Blomgrens have about 12,000 square feet of the tunnels on their farm for production of vegetables as well as flowers. Many more details are included in the manual High Tunnels: Using Low Cost Technology to Increase Yields, Improve Quality, and Extend the Growing Season. Ted Blomgren is co-author with Tracy Frisch and Steve Moore of this excellent resource, which was published by the University of Vermont Center for Sustainable Agriculture.  It covers many kinds of season extension structures, from low tunnels to Haygrove multi-bay tunnels.

The High Tunnels manual is available free as a PDF at http://www.uvm.edu/sustainableagriculture/hightunnels.html. There is an accompanying DVD, for $15, that features six farmers explaining how and why they constructed their high tunnel system, what they grow in it, and how it helps sustain their farming operation. To order the video, see http://www.uvm.edu/vtvegandberry/Videos/hightunnelvideo.html, or call (802) 656-5459.


With a Full Access membership to Growing for Market Online, you can read more than 1,200 helpful articles about market farming -- everything published from 2001 to the present. Type any term into the search box at top left to see if GFM can help you with your research and planning. Click here for more information about the Full Access membership.

The Hoophouse Handbook is a great introduction to building and growing in unheated hoophouses/high tunnels.