I’ve often wondered why more market growers don’t use umbrella pruning for greenhouse and hoophouse cucumbers. It’s probably the most common way of growing cukes in greenhouses, and translates well to hoophouses and smaller structures with trellising in the 6-7’ range. I’m pretty sure the reason it’s not used more is unfamiliarity, since most smaller growers I’ve talked with don’t know about it. It’s called umbrella style because the main stem is grown up a string (the umbrella handle), topped at the wire, and two suckers are allowed to grow out to each side (the umbrella canopy).

One of the difficulties of growing cucumbers in a confined space is that they grow so fast, they rapidly fill up the space and crowd each other. The umbrella method solves this problem by topping the plants when they reach the trellis wire, allowing side branches (a.k.a. suckers or laterals) to fill the space between plants and bear most of the fruit. After the plants are topped, there is almost no more pruning necessary during the harvest stage.

This short article is adapted from my new book, The Greenhouse and Hoophouse Grower’s Handbook. Growing umbrella cukes comes down to spacing and pruning, as all the other details (propagation, variety selection, temperature, harvest, pests and diseases etc.) are the same as in other methods for growing protected cukes.

Below, umbrella cukes growing in a greenhouse. These young plants have just reached the top wire and are soon to be topped. Photo by Andrew Mefferd.

Spacing
Most umbrella cucumbers are planted in double rows 2’ apart, with 3’ between plants in the row, and a 3’ walkway. Or you can plant a single row 1.5’ apart, and train every other plant to opposite sides of the double row. The advantage to planting a single row is ground cover can be pulled up close on either side of the row, leaving very little area exposed for weeds to grow. Either way, you need two trellis wires or pipes two feet apart above the crop to tie trellis strings to.

Pruning and trellising
One piece of twine per plant is tied to the overhead wire. The vine is grown up the twine by twisting or clipping, removing suckers on a regular basis as the vine grows up.

After pruning large-fruited cukes off the initial two feet of stem, let a cuke develop at every other node up to the wire. As the plants approach the top wire, make sure and leave the three suckers immediately below the wire. You really only need two (one for each side of the plant), but leave an extra in case one of them gets damaged, you’ll still have two left. Let these three suckers grow and as the head of the plant grows, cut it off just above the wire. Topping the plant will push the energy that was going to the head to the suckers left on the plant.

Secondary laterals and cucumbers will continue forming on the primary laterals through the productive life of the plant. Umbrella trellising essentially turns the cucumber vine into a determinate by limiting its upward growth. The plant will only remain productive for so long after being topped. Some growers decide to germinate the next crop when they notice yield from the first crop slowing down, while others start plants on a fixed schedule with each crop lasting for 3-4 months of picking.

The best cukes for hoophouses

Cucumbers can be a valuable crop when grown in a high tunnel. Like tomatoes, they are grown vertically on a trellis or string, so the yield per square foot can be impressive. The protected environment of the high tunnel allows for early and late production, and insect screening may thwart cucumber beetles in locations where the insects are a serious problem. Cucumbers can be grown in spring with tomatoes, or they can be the second crop after tomatoes, when tomato prices fall in mid summer. 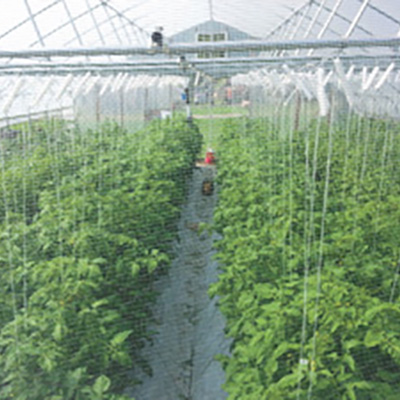 Read More
The "other" reasons to grow in a greenhouse

Increased heat and an extended season are the most common reasons growers are drawn to growing in a greenhouse. But if you’re sitting on the fence, not sure if greenhouse growing is for you, there are many other good reasons, some of which are not obvious unless you’ve grown under cover before.

Most of the time when growers reach out to my consulting group, Greenhouse Vegetable Consultants, to help them decide whether to grow in a greenhouse, it has to do with looking at the costs and the return on investment (ROI). Inputs and capital expenses are high, so you have to know the market to see if it's worthwhile.

In the March 2016 issue of Growing for Market I wrote about hoophouse siting and planning, USDA grants and shopping for a suitable structure. I discussed the two basic shapes (Quonset and gothic), as well as single versus double layer plastic. Here I will discuss the next stages of design.

The next time your greenhouse or hoophouse needs a new covering, consider whether it would be smart to spend more for a special greenhouse film, instead of opting for the least expensive option of clear poly.