The scientific truth about garlic varieties

This article originally appeared in the October 2010 issue of Growing for Market Magazine.
Garlic is grown and sold under hundreds of different variety names. However, research tells us that there are really only ten types of garlic. In this article, we will look at why there is so much confusion over garlic varieties, and what it means to you as a grower.
Why all the confusion?
When getting started with garlic production, growers soon learn that there are literally hundreds of named cultivars or strains available in the U.S. and Canada. Choosing among that wealth of options is a challenge that has befuddled many beginners. As Ron Engeland wrote in his book Growing Great Garlic, “Professionals have wrestled with the problem of garlic varieties for over 100 years and basically succeeded in creating a very fine mess with very little agreement.”
Fortunately, science has come to the rescue of garlic growers and provided some definitive information about the confusing subject of garlic varieties. Now it’s known that all varieties can be sorted into 10 basic types; that there is a great deal of duplication among the so-called varieties; and that many with different names are genetically very similar. It’s also known that some of garlic’s most important traits are determined by location, soil, climate, and the skill of the grower.
Similarities and differences between varieties

Botanically, all of the common culinary garlics are in the species Allium sativum. (This doesn't include elephant garlic, which is species Allium ampeloprasum var. ampeloprasum.) There are two sub-species within Allium sativum: the hardneck or ophio garlics, which have scapes; and the softneck garlics, which don’t.
Hardneck garlic is more flavorful and the cloves are bigger and easier to peel than softnecks. Softneck garlic, the kind usually found in supermarkets and often imported, has the best storage life and is easier to braid than hardnecks.
Growers with freezing winter weather can grow either hardneck or softneck garlic, but have the best success with hardnecks. Growers in warm winter areas may do better with softnecks.
Sorting through the names
In 2003, Dr. Gayle M. Volk of USDA’s National Center for Genetic Resources Preservation in Fort Collins, CO, did DNA fingerprinting of 211 varieties of garlic. Many were so genetically similar as to be statistically the same.
However, she found that there are 10 distinct types: silverskin and artichoke are the two softneck types; rocambole, porcelain, purple stripe, marble purple stripe, Asiatic, turban, creole, and glazed purple stripe are hardneck types.

On-farm research project sorts out the differences
In 2005, Dr. Volk and David Stern of the Garlic Seed Foundation led a project in which 10 cultivars, one of each of the 10 types, were grown by garlic farmers in 12 locations around the United States and Canada. The cultivars were ‘Ajo Rojo’, ‘Chesnok’, ‘German White’, ‘Inchelium’, ‘Purple Glazer’, ‘Red Janice’, ‘Sakura’, ‘Siberian’, ‘Silverwhite’, and ‘Spanish Roja’.
The small-scale, sustainable farmers participating in the project were provided with planting stocks from the same original sources and were asked to grow them on their farms for two consecutive years using their best practices. The harvested bulbs were analyzed for quality, wrapper color, yield, clove characteristics, and elemental composition. Here are the significant findings reported in the August 2009 issue of HortScience:
“Clove arrangement, number of topsets, topset size, topset color, number of cloves, clove weight, clove skin color, and clove skin tightness were generally stable for each cultivar regardless of production location and conditions.  Soil potassium levels were positively correlated with bulb circumference and fresh weight. Soil sulfur and manganese levels were correlated with bulb sulfur and manganese content."
For detailed descriptions and photographs of the 10 types of garlic, click the link to visit The Garlic Seed Foundation here.
Some traits vary depending on where a variety is grown
Bulb wrapper color and intensity were highly dependent on location and cultivar. The Silverwhite cultivar was consistently white and ‘Ajo Rojo’, ‘German White’, ‘Inchelium’, ‘Sakura’, and ‘Spanish Roja’ were generally white with some faint violet or brown stripes or splotches across the locations. In contrast, cultivars Chesnok Red, Purple Glazer, Red Janice, and Siberian were more likely to have moderate or dark violet stripes, streaks, or splotches, particularly when grown at the northern Colorado, Minnesota, Nevada, New York, Ontario, Pennsylvania, or Washington locations.”
The implication for growers is that the variety you plant may look different in size and color when you harvest it, especially if you purchased it from a distant supplier. Dr. Volk’s advice is to trial a number of different varieties representing the different types.  She suggests that, at the least, you grow an artichoke, silverskin, purple stripe, porcelain and a rocambole.
Skilled growers can grow almost all types well, she said, so personal taste and market success may be the most important factors to consider when assessing a variety. Once you have determined the type that works best for your farm and markets, you can begin to propagate your own stock, selecting the biggest and best bulbs to plant the next year. In this way, you develop your own strain adapted to your conditions.
Once you've figured out which varieties you want to plant, read our article about how to plant garlic here.

Checklist for a successful garlic harvest

Usually when garlic is ready to be harvested and dealt with, the farming year is in full swing, and bodies and brains are tired a lot of the time. We have made ourselves a checklist to help things go more smoothly, and make sure no important step gets forgotten. This also helps new crew know what they are supposed to be doing when and if they get confused. 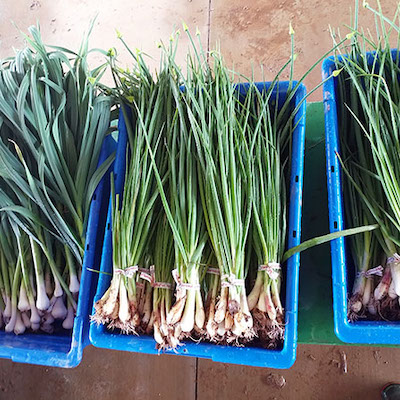 What if I told you this fall you could plant Dutch shallots, and harvest perfect overwintered scallions at the end of April? It’s easy. You just have to stretch your imagination a little. This article shares my wonder and amazement for shallots as a multi-yielding crop. 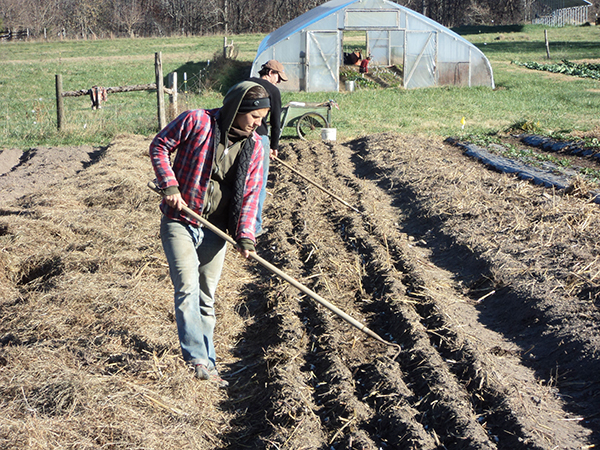 Garlic is a high-value crop and a heavy feeder. It needs full sun and a good range of available nutrients. Planting in raised beds helps soil drainage, reduces soil compaction and facilitates harvest. Garlic does best in a sandy or clay loam with very good drainage and lots of organic matter. Fall is the best time to add compost or other fertility amendments, such as soybean meal. Avoid over-fertilizing or the growth will be too tender to survive cold conditions, and the storage life of the garlic will be shortened. Avoid soluble nitrogen fertilizer in the fall to prevent leaching into ground water. 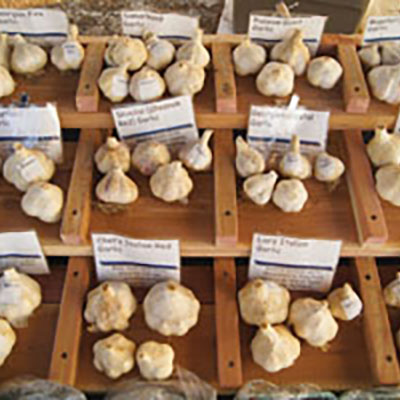 In our years as a market farm near Columbia, Missouri, we became known in the community for our diverse garlic. This crop consisted of 12 or so varieties with distinct culinary qualities and uses, which we presented on our market stand using methods that attracted and informed consumers while maximizing our income from the many sizes and variations inherent in our garlic crop. We found that customers really responded to our presentation of garlic as a diverse ingredient that could be targeted to specific culinary uses. 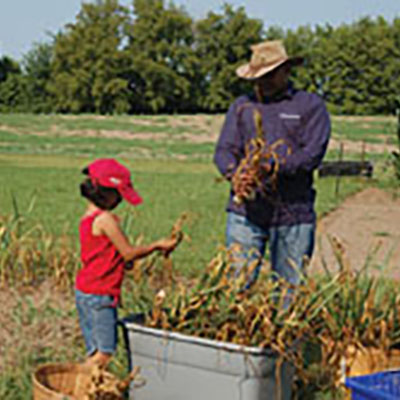 Disease suspected in some garlic

Many Midwestern growers had problems this year with garlic crops — foliage that died early, bulbs that didn’t fill out or were smaller than usual, and now rotting of cured bulbs in storage. Testing of affected garlic by the Plant Disease Clinic at the University of Minnesota has confirmed the presence of Aster Yellows, a pathogen that was previously unknown in garlic in the U.S. 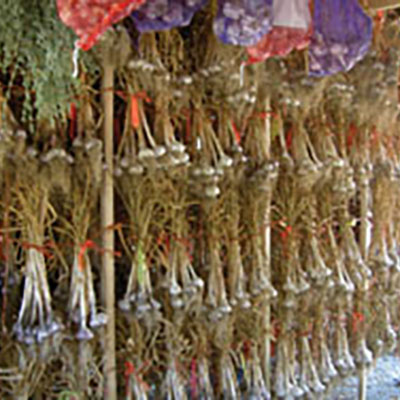 At Honeyhill Farm in upstate New York, Fred Forsburg grows 2 acres of garlic for both seed and table. They plant about 40,000 cloves each fall, and harvest a similar number of heads each July. They grow only hardneck varieties, mostly German White. 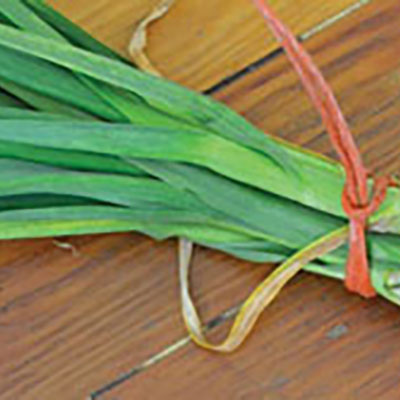 Over the years garlic has been a small but stalwart crop on the CSA farms that I’ve worked on, and on my own farm. Compared to many other crops, it grows easily and reliably, is adaptable to a variety of techniques, provides harvestable parts all through the spring and, when cured and stored properly, can be sold all through the summer, fall and winter. 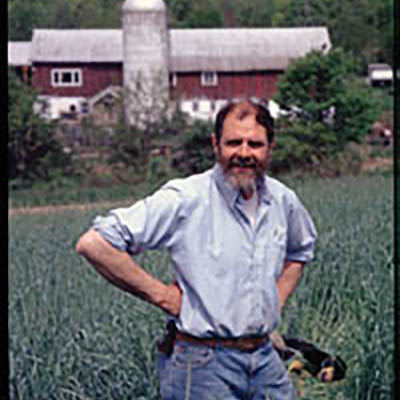