In memory of Chris Blanchard 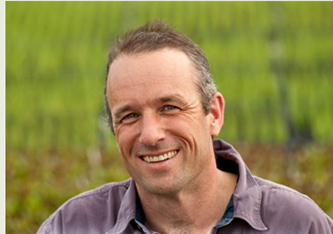 Chris Blanchard, one of the leading lights of the organic farming world, passed away on October 28 from cancer. He leaves an impressive body of work that will help market farmers far into the future.

After running his own organic farm in Decorah, Iowa, for 15 years, Chris dedicated himself to sharing his knowledge. He was a popular speaker at farming conferences, a prolific writer, and the creator of a podcast that has kept market farmers company through their solitary workdays, with 176 episodes aired before he became too ill to continue in September.

Nearly everyone who knew Chris Blanchard can recall the first time they met. For me, it was some time in the 1990s, at an Upper Midwest Organic Farming Conference on a snowy night in Wisconsin. My husband and I had just arrived, with our two young kids in tow, road weary and a little nervous about my upcoming speech. But we were immediately put at ease by the enthusiasm and kindness of the young man who greeted us.

Over the next 25 years, as Chris grew in experience and renown, he never lost a bit of that enthusiasm and kindness. Chris became a Contributing Editor for Growing for Market, and I often asked him to write for the magazine. He always said yes — and turned in articles that were bright, accurate, and well-written.

Chris was an extraordinary public speaker, able to convey solid information with clarity and wit that energized his audiences. He preached the importance of record keeping and introduced farmers to his retro-style system that involved a packet of index cards in his pocket. He became an expert on new food safety regulations and could quote federal regulations but also condensed the rules into one sentence: “Keep poop off the food.”

One of his favorite topics was achieving work-life balance. After divorcing in 2009, Chris spoke frankly about his own failure to enjoy life apart from work, and he urged new farmers to reserve time for family, rest, and other interests.

“Farms are like two-year-olds,” he said earlier this year at the MOSES conference keynote. “They’re very loud and very insistent about what they need and what they want from you. If you don’t set some limits, you’re going to be a slave to the two-year-old.”

After Chris sold his farm, he married Angie Sullivan, and moved to Madison, Wisconsin. From all reports, he achieved an admirable work-life balance of spending time with his family and friends while also producing his groundbreaking Farmer-to-Farmer podcast.

In his last email to listeners, Chris wrote: “When I set out to start the Farmer to Farmer Podcast – a process that began about four years ago now on a drive to Northfield, Minnesota – I thought of it as a marketing tool for my consulting business. I had no idea of the reception it would get in the market farming community, and I certainly did not expect it to take on a life of its own. The reception it did get, and the life that it took on as a result, was wonderful and heartwarming, and has served as a deeply rewarding capstone to my career, especially in the face of a serious illness these past thirty months.”

Chris’ work was a gift to us all, and it is with sorrow and fondness that we say farewell.

A celebration of life will be held 4-7 p.m. Nov. 10 at Olbrich Botanical Gardens in Madison. Gifts in his memory are requested for the Chris Blanchard Scholarship Fund to help farmers attend the MOSES Organic Farming Conference, which Chris organized for many years. His podcast will be maintained at www.farmertofarmerpodcast.com. 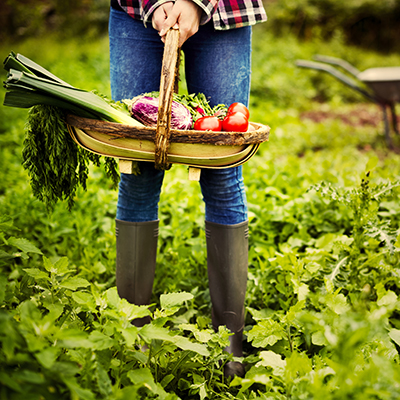 Financial statements every farm should use

With the end of the year in sight, it’s time to start thinking about evaluating your farm’s business performance for the year – and that means it’s time to think about the creation of the three key financial documents that provide a picture of the financial state of your business: the balance sheet to show your overall financial position; the income statement to show your financial performance for the previous year; and the statement of cash flows to describe the way money – including loan proceeds, debt service, and family living expenses – moves through your business. 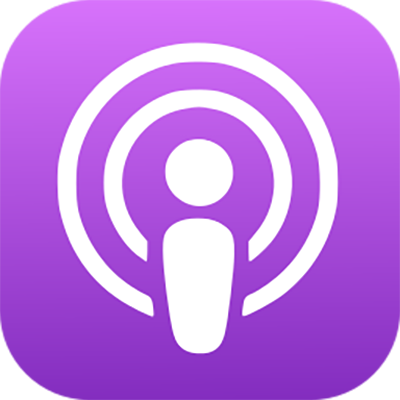 Podcasts: a diversion from tedious tasks

For most market farmers, there are many periods of time when your hands are busy but your mind isn’t required -- transplanting, hand weeding, washing root crops, and so on. Rather than daydreaming, fretting or, worse still, hearing some annoying pop song going round and round in your head, you might consider listening to podcasts. 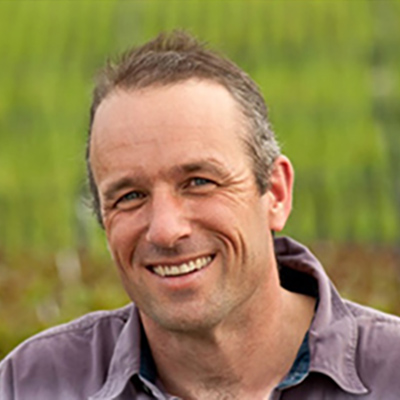 Set the stage for growth next year

September is a great time to get started on your plans for next year. The ground is still in working condition, so you can set the stage for increased or improved production. With everything coming into its fullness, you’ve got product to share with prospective customers, setting the stage for selling more product to more people. And with the reality of your farm staring you in the face, you’ve also got the reality check you need to decide if it’s time to get bigger, get better, or do a little bit of both.

Gardens of Eagan got its start in 1973, when Martin Diffley began growing  organic vegetable on  his cousins’ land in Eagan, Minnesota, and selling them at a roadside stand. Over the next several years, the operation grew, and Martin began delivering to natural foods co-ops in the Twin Cities. Joined in 1985 by Atina Diffley, the operation moved south to Farmington, still just 37 minutes from the Twin Cities natural foods market, in 1994. 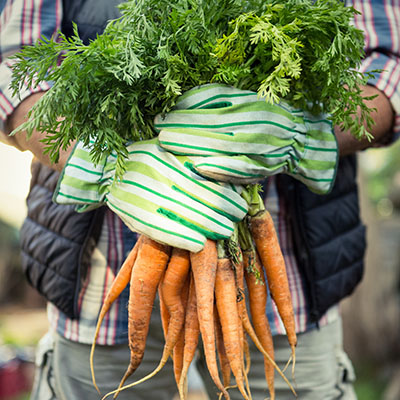 Determine your labor costs and use the information wisely

For most market farms, labor makes up the single biggest category of expense. Surveys cite figures of up to 42% for direct payroll expenses. When you add in associated expenses like worker’s compensation and payroll taxes, that number gets even higher – and that’s before considering the value of the farmer’s labor. 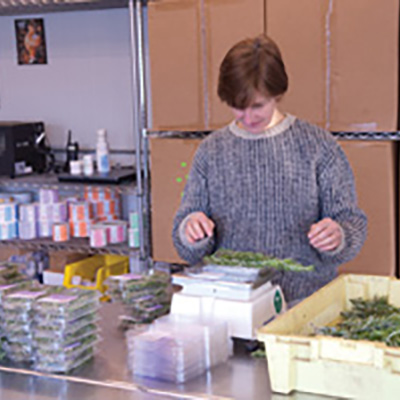 While thyme and rosemary don’t show signs of stress after harvesting, mints and oregano can seem to wilt before your eyes if you’ve waited for the morning’s dew to evaporate before harvesting. Protecting the harvested crop, cooling it properly, and maintaining proper temperatures and humidity all have a very real impact on the quality of the product when it gets to the final customer.

At Rock Spring Farm, we stumbled into the culinary herb business over a period of years. What started as a few plants for our own use turned into substantial plantings for a 200-person CSA. Excess capacity bled over into sales to retail stores in small bags with handwritten labels. Success in that venue led us to putting herbs in clamshells with printed labels and UPC codes, helping us to reach a wider market that turned our herb program into a corner of the farm’s success. We learned a lot of important lessons along the way, but among the most important was that to produce herbs for sale in large volume required an entirely different set of techniques and considerations from growing herbs as a small side venture.

Wherever water comes into contact with produce, it has the potential to violate the most fundamental of food safety tenets: keep the poop off of the food. Whether it originates from a pond, a stream, or a well, water has the potential to carry and spread the foodborne pathogens that can make people sick.

We already have safe food. Even the large, centralized mega-farms and distribution centers in the desert west produce safe food. In 2006, over 50 billion servings of fresh-cut salad greens and spinach were sold in this country – but an E. coli 0157:H7 outbreak that fall killed five people, and spinach sales still haven’t recovered to a pre-2006 level.
Even at that, the Food Safety Modernization Act is not about keeping people safe.

Because we grow food on farms, and not in factories, we can’t eliminate the risk of contamination altogether, but understanding the risks can help us evaluate the best ways to reduce the potential contamination of fresh produce on our farms.Domestic and wild animals present less of a food safety risk to foods that are rarely eaten raw, such as potatoes and rutabagas, because cooking kills most microbial pathogens. Crops grown underground are also at much less risk that those grown above ground.

The first principle of microbiological food safety is to keep the poop – and the potentially nasty microbes it carries – off of the food in the first place. That means keeping tools, equipment, and facilities from being contaminated by feces from people and animals right from the start. And because poop inevitably does make it onto our produce and into our packing environment, we need to take reasonable steps to ensure that our tools and equipment don’t spread that poop from one item or one place to another. 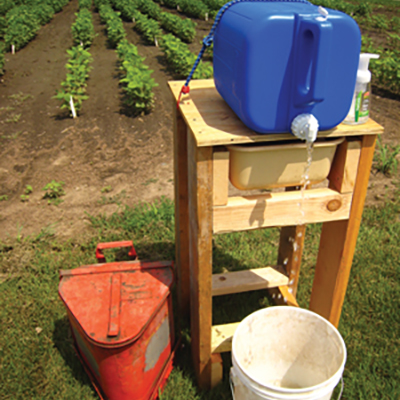 The human element of food safety

On the market farm, almost every crop is harvested and handled by human hands at some point between harvest and sale. People bunch kale, pick up carrots, sort tomatoes, and dump rutabagas into the barrel washer. Even the most automated salad mix washing line still gets cleaned and maintained by people. 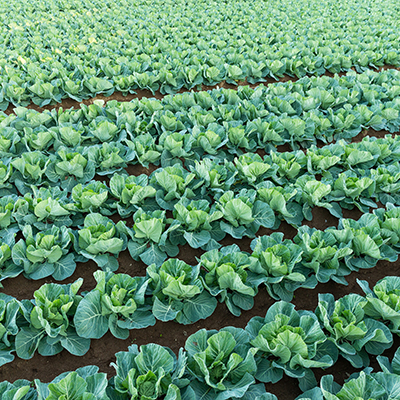 With all of the focus on the implementation of the Food Safety Modernization Act, it’s easy to forget that it’s not all about log sheets, audits, and bureaucrats: it’s about keeping the food we grow safe from microbiological and other dangerous contamination.

Walking around the farm, driving deliveries, or lying in bed worrying about stuff, I’m constantly noticing things that need my attention. All of this stuff can stack up in my brain like a pile of dirty vegetables. And just as a pile of dirty vegetables won’t do you any good – and will, in fact, rot and create a pile of stink – the ideas in my brain need a way to get my attention when the time is right. I need to put them into some sort of holding place – a sort of walk-in cooler for my thoughts – where I can come back to them at a time of my choosing and give each thought the consideration it needs, knowing that every idea I’ve plucked from the vine will still be there. 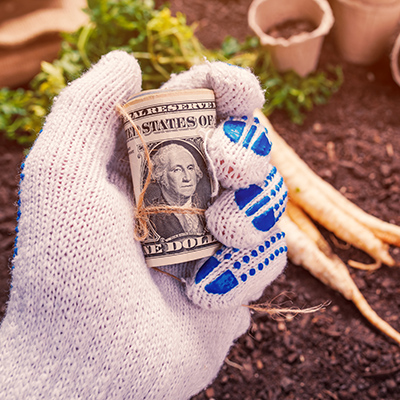 Knowing that you’ve got money at the end of the year means that you’ve done okay in the market farming game. But if you want to do better — if you want to put your effort into those crops that make the most difference to your bottom line — you need to know how much it costs to grow and market your crops.

If you sell at a farmers market or to stores and restaurants, you’ll want to know that you are making money on each crop, not just on your offerings as a whole. And you’ll want to know what crops to push, and where you should raise your prices or discontinue a product.